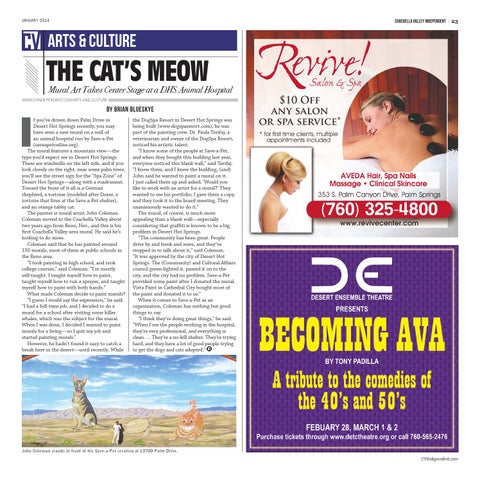 By BRIAN BLUESKYE f you’ve driven down Palm Drive in Desert Hot Springs recently, you may have seen a new mural on a wall of an animal hospital run by Save-a-Pet (saveapetonline.org). The mural features a mountain view—the type you’d expect see in Desert Hot Springs. There are windmills on the left side, and if you look closely on the right, near some palm trees, you’ll see the street sign for the “Spa Zone” of Desert Hot Springs—along with a roadrunner. Toward the front of it all is a German shepherd, a tortoise (modeled after Dozer, a tortoise that lives at the Save-a-Pet shelter), and an orange tabby cat. The painter is mural artist John Coleman. Coleman moved to the Coachella Valley about two years ago from Reno, Nev., and this is his first Coachella Valley-area mural. He said he’s looking to do more. Coleman said that he has painted around 150 murals, most of them at public schools in the Reno area. “I took painting in high school, and took college courses,” said Coleman. “I’m mostly self-taught. I taught myself how to paint, taught myself how to run a sprayer, and taught myself how to paint with both hands.” What made Coleman decide to paint murals? “I guess I would say the expression,” he said. “I had a full-time job, and I decided to do a mural for a school after visiting some killer whales, which was the subject for the mural. When I was done, I decided I wanted to paint murals for a living—so I quit my job and started painting murals.” However, he hadn’t found it easy to catch a break here in the desert—until recently. While

the DogSpa Resort in Desert Hot Springs was being built (www.dogsparesort.com), he was part of the painting crew. Dr. Paula Terifaj, a veterinarian and owner of the DogSpa Resort, noticed his artistic talent. “I know some of the people at Save-a-Pet, and when they bought this building last year, everyone noticed this blank wall,” said Terifaj. “I knew them, and I knew the building, (and) John said he wanted to paint a mural on it. I just called them up and asked, ‘Would you like to work with an artist for a mural?’ They wanted to see his portfolio; I gave them a copy, and they took it to the board meeting. They unanimously wanted to do it.” The mural, of course, is much more appealing than a blank wall—especially considering that graffiti is known to be a big problem in Desert Hot Springs. “The community has been great. People drive by and honk and wave, and they’ve stopped in to talk about it,” said Coleman. “It was approved by the city of Desert Hot Springs. The (Community) and Cultural Affairs council green-lighted it, passed it on to the city, and the city had no problem. Save-a-Pet provided some paint after I donated the mural. Vista Paint in Cathedral City bought most of the paint and donated it to us.” When it comes to Save-a-Pet as an organization, Coleman has nothing but good things to say. “I think they’re doing great things,” he said. “When I see the people working in the hospital, they’re very professional, and everything is clean. … They’re a no-kill shelter. They’re trying hard, and they have a lot of good people trying to get the dogs and cats adopted.”

John Coleman stands in front of his Save-a-Pet creation at 13700 Palm Drive. CVIndependent.com 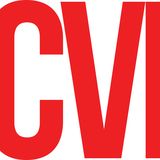 The January 2014 issue of the Coachella Valley's alternative news source.

The January 2014 issue of the Coachella Valley's alternative news source.