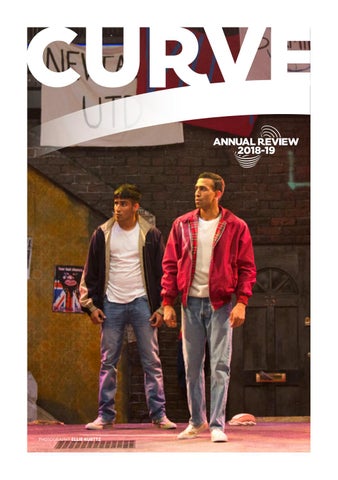 We are pleased to report another terrific year for our theatre with programmes both on and off our stages continuing to engage, entertain and inspire audiences and participants from across our city and beyond. Throughout the year we also took time to mark 10 years of Curve through a range of projects and initiatives including Curve Live! – a concert which celebrated the first decade of our theatre (and played to over 1500 people free-of-charge) and our Heritage Lottery supported community project, Fashioning A City which told the stories of our city through the eyes of 300 young people from across Leicester and Leicestershire. In the last 12 months we welcomed almost 350,000 visitors to our theatre and sold 220,000 tickets – almost 30,000 more than 18/19 – to over 600 performances across our three theatre spaces. We continued to find more ways to increase access to our work through a regular programme of free family days, workshops, projects, foyer performances, £1 dress rehearsals and our newly formed free 16-26 membership scheme. We also programmed over 40 access performances throughout the year and offered over 300 low-cost workshops through our partnership with our six Affiliate Companies including Nupur Arts, Sidekick Dance and Kainé Choir. Made at Curve continued to go from strength-tostrength and we produced or co-produced nine new productions and continued existing tours of a further three shows. Our Made at Curve work

recorded an average 74% attendance across the year. In addition to our produced programme, we continued to present work from a diverse range of companies and producers including Company Chameleon, Matthew Bourne, National Theatre, English Touring Opera, Northern Ballet, Rasa Theatre and Mischief Theatre. Curve once again continued to be a venue of choice to open major touring work and we were delighted Cameron Mackintosh’s Les Misérables launched in Leicester before embarking on UK tour. Touring continues to play a key part in our business and throughout the year we co-produced seven touring productions including a major tour of An Officer And A Gentleman, The Cat In The Hat, Hairspray and Sunset Boulevard. We were also delighted to transfer our production of Pink Sari Revolution to Mumbai as part of the Arts Council and British Council funded Reimagine India programme of work. Throughout the year we continued to invest in talent and just under 2000 artists took part in over 300 artists development activities. In addition, 16,000 young people took part in learning programmes led by Curve Learning Practitioners, and every week over 200 young people aged between 7 and 25 years took part in Curve Young Company (CYC) sessions led by practitioners and visiting artists. As we enter our second decade, Curve has never been in a stronger position and we look forward to the future with confidence and excitement. Who knows what our teenage years will bring?! Chris Stafford Chief Executive

2018 was a landmark year for Curve as we celebrated our 10th birthday and a decade of operations in our iconic theatre, a theatre rooted in the heart of our community but with a national and, indeed, international vision and ambition built into all of our work. On stage we had a rich and varied year. Above all Curve is a producing house – we make theatre – and highlighting just a handful of the many shows we presented last year serves to underline the balance we aim to strike between our popular and commercially successful programming and the newer often more challenging work we present. White Christmas, Irving Berlin’s ever-popular festive spectacular, directed by Curve’s own Artistic Director, Nikolai Foster, took over our larger theatre from late November into January (and transferred to London’s vast Dominion Theatre for Christmas 2019). At the same time Dr Seuss’s riotous The Cat In The Hat caused joyous mayhem for younger audiences in the studio theatre. We were thrilled to have Akram Khan’s Xenos in the theatre and to open Dougal Irvine’s adaptation of Memoirs Of An Asian Football Casual. Both works were highly acclaimed and broadened audience perceptions of Curve. Memoirs was a real breakthrough show for us. Not only was it nominated for a What’s On Stage Award, it also won the Asian Media Award for Best Stage Production. A real highlight was almost half of its audience were first time visitors to the theatre

(and that’s an important achievement; we have to work hard to develop tomorrow’s audiences today). Xenos too was much lauded, winning an Olivier Award for its creator Akram Khan. All of this work and more helped us to deliver a sound trading outcome for Curve in 2018/19. We generated turnover of £11.3m – £600,000 higher than the previous year – and made a small surplus of £60,000, all of it reinvested in the theatre. The Board of Trustees has appointed a number of new members this year including two representatives of our newly established Youth Advisory Board. Once again this year the Board acknowledges the immense contribution of Curve’s Chief Executive Chris Stafford and Artistic Director Nikolai Foster. For the fourth year running both Chris and Nikolai appeared in The Stage 100, a reflection of their standing (and Curve’s I’d say) in the industry. Finally I’d like to thank all of my fellow Trustees for their continuing efforts this year and on their behalf I thank all of Curve’s staff and visiting artists for their skill and commitment; I’d like to thank our audiences and particularly our members for their loyalty, our co-producers for their continuing participation and our funders – chiefly Arts Council England and Leicester City Council for their support and encouragement throughout. Ian Squires Chairman, Leicester Theatre Trust

THE CRUCIBLE BY ARTHUR MILLER

‘This is a production which should be applauded for achieving its objectives of commitment to performance and community inclusion.’ BRITISH THEATRE GUIDE PHOTOGRAPHY PAMELA RAITH

‘A triumph of energy, empathy and intelligence.’ THE TELEGRAPH PHOTOGRAPHY JEAN LOUIS FERNANDEZ

Winner of the Best Stage Production at the Asian Media Awards & nominated for Best Regional Production at the Whatsonstage awards. Hareet Deol & Jay Varsani joined Curve as Associate Artists. 50% of all attendees enjoyed their first trip to our theatre.

‘A tour de force in its exploration of the intersections between racism, violent, masculinity and Britishness.’ THE GUARDIAN PHOTOGRAPHY ELLIE KURTTZ

New Theatre Talent was our free training programme for people in Leicester from Black, Asian or Minority Ethnic and low socio-economic backgrounds, aged 18 to 25 who wanted to pursue an acting career. The programme was funded by the Andrew Lloyd Webber Foundation and culminated in a headline performance for our 2018 Inside Out Festival.

‘This production gave the alumni of Curve’s inaugural New Theatre Talent programme a great showcase allowing them to build characters and present them to an appreciative public.’ WESTERN PARK GAZETTE PHOTOGRAPHY PAMELA RAITH

Partnered with Charity Link to offer 1,200 tickets to people in financial hardship, to experience Christmas at Curve for free. 2019 transfer to the Dominion Theatre. 109% performance to target.

Learning, Participation & Artist Development Throughout the year we continued to invest in talent and just under 2000 artists and participants took part in over 300 artist development activities. In addition, 50 artists took part in sustained development programmes across the year and we embarked on our first year working as part of the Arts Council England funded programme ‘In Good Company’ for artists across the region. As well as supporting our 18 Breakthrough Artists & Companies, local-writers took part in our Writer’s Lab programme, and 18 local artists & companies presented 15 different performances as part of our annual Inside Out Festival including Kesha Raithatha, Mia Johnson and Subhash Vimen. Curve co-commissions of Debris Stevenson’s Poet In Da Corner and Rachael Young’s Nightclubbing also enjoyed national and international success with performances at the Royal Court and across the USA respectively. In addition to commissioning eight new works we also worked in partnership with Kali Theatre to support the work of four South Asian female playwrights and we launched the Naseem Khan Commissions (with Bristol Old Vic and the Lowry) to develop new work by artists of colour.

We also piloted our free drama training programme New Theatre Talent (NTT) for 16 young people aged between 18-25 years old from BAME or challenging socio-economic backgrounds. Supported by the Andrew Lloyd-Webber Foundation, NTT offered participants an intensive actor training programme (scheduled around working hours) which culminated in a professionally directed showcase production of Ché Walker’s The Frontline which was presented as part of Inside Out Festival. In addition to supporting the work of emerging talent through NTT, we also appointed a Resident Director as part the Weston Jerwood Creative Bursaries programme aimed at improving diversity within our sector. Throughout the year we also continued to support the development of seven BAME managers and emerging leaders from Leicestershire through the Curve Cultural Leadership Programme. In the second year of the programme participants took part in sessions at Curve as well as secondments and mentoring sessions. The programme culminated in 2019 with each participant sharing the impact it has had on them with an invited audience hosted by Farooq Chaudhry from Akram Khan Company. In 2018/19 over 300 schools and 16,000 young people took part in learning programmes led by Curve Learning Practitioners. In addition, each week over 200 young people aged between 7 and 25 years took part in Curve Young Company (CYC) sessions led by practitioners and visiting companies including New Adventures, Rambert and Central School of Speech and Drama. We also produced four CYC productions which were seen by an audience of over 8,500. We also hosted the National Student Drama Festival where over 300 young people from across the country came to take part in workshops at Curve from leading industry figures. Curve Associate Company National Youth Music Theatre once again returned to Curve with new musical Super Hero. Curve’s partnerships with further and higher education institutions continued throughout 18/19 with projects developed with De Montfort University, University of Leicester and Loughborough University.

Happy Birthday Curve! We marked our special 10th anniversary with a variety of performances, events and projects. Our community production of A Fiddler on the Roof engaged over 100 participants from Leicestershire including 14 disabled participants from SideKick Dance. On Sunday 26 August, we presented our FREE 10th Birthday Concert Curve Live! Featuring songs, drama and dance performances from Curve artists past and present, the concert saw Rafael Viñoly’s magnificent vision for the theatre fully realised, as Curve’s theatre spaces were transformed into an in-the-round arena, with 1,500 seats. With funding from Heritage Lottery Fund we worked with 304 young people from nine areas of low engagement from Leicester as part of Fashioning A City. Through Fashioning A City we developed partnerships with a range of local community organisations (including The Brite Centre, Pork Pie Centre and the African Caribbean Centre) who supported the delivery of the project which culminated in 21 performances in a range of community settings attended by over 3,000 people free-of-charge. Our pledge to providing accessible pricing continued as our £1 public dress rehearsals played to 73% capacity and we made available £10 tickets across almost every show programmed throughout the year. We also partnered with Charity Link to provide over 200 people living in hardship with a Christmas at Curve including a free ticket to a performance or either White Christmas or The Cat in the Hat.

THANK YOU OUR PRINCIPAL FUNDERS

OBSERVERS TO THE BOARD Kevan Grantham Clare Simpson

Curve is run by Leicester Theatre Trust Limited, a registered charity (No. 230708). We gratefully acknowledge and welcome the continued support of and partnership with the organisations listed below. 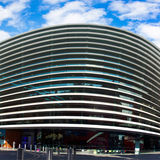