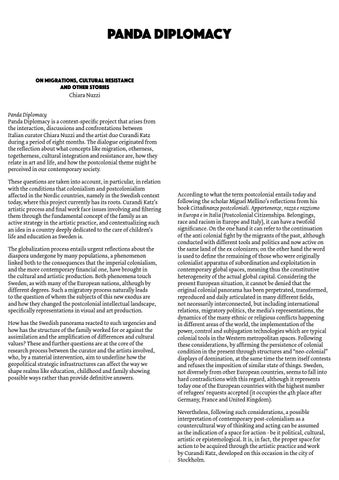 PANDA DIPLOMACY on migrations, cultural resistance and other stories Chiara Nuzzi Panda Diplomacy Panda Diplomacy is a context-specific project that arises from the interaction, discussions and confrontations between Italian curator Chiara Nuzzi and the artist duo Curandi Katz during a period of eight months. The dialogue originated from the reflection about what concepts like migration, otherness, togetherness, cultural integration and resistance are, how they relate in art and life, and how the postcolonial theme might be perceived in our contemporary society. These questions are taken into account, in particular, in relation with the conditions that colonialism and postcolonialism affected in the Nordic countries, namely in the Swedish context today, where this project currently has its roots. Curandi Katz’s artistic process and final work face issues involving and filtering them through the fundamental concept of the family as an active strategy in the artistic practice, and contextualizing such an idea in a country deeply dedicated to the care of children’s life and education as Sweden is.

According to what the term postcolonial entails today and following the scholar Miguel Mellino’s reflections from his book Cittadinanze postcoloniali. Appartenenze, razza e razzismo in Europa e in Italia (Postcolonial Citizenships. Belongings, race and racism in Europe and Italy), it can have a twofold significance. On the one hand it can refer to the continuation of the anti colonial fight by the migrants of the past, although conducted with different tools and politics and now active on the same land of the ex colonizers; on the other hand the word is used to define the remaining of those who were originally colonialist apparatus of subordination and exploitation in contemporary global spaces, meaning thus the constitutive heterogeneity of the actual global capital. Considering the present European situation, it cannot be denied that the original colonial panorama has been perpetrated, transformed, reproduced and daily articulated in many different fields, not necessarily interconnected, but including international relations, migratory politics, the media’s representations, the dynamics of the many ethnic or religious conflicts happening in different areas of the world, the implementation of the power, control and subjugation technologies which are typical colonial tools in the Western metropolitan spaces. Following these considerations, by affirming the persistence of colonial condition in the present through structures and “neo-colonial” displays of domination, at the same time the term itself contests and refuses the imposition of similar state of things. Sweden, not diversely from other European countries, seems to fall into hard contradictions with this regard, although it represents today one of the European countries with the highest number of refugees’ requests accepted (it occupies the 4th place after Germany, France and United Kingdom).

The globalization process entails urgent reflections about the diaspora undergone by many populations, a phenomenon linked both to the consequences that the imperial colonialism, and the more contemporary financial one, have brought in the cultural and artistic production. Both phenomena touch Sweden, as with many of the European nations, although by different degrees. Such a migratory process naturally leads to the question of whom the subjects of this new exodus are and how they changed the postcolonial intellectual landscape, specifically representations in visual and art production. How has the Swedish panorama reacted to such urgencies and how has the structure of the family worked for or against the assimilation and the amplification of differences and cultural values? These and further questions are at the core of the research process between the curator and the artists involved, who, by a material intervention, aim to underline how the geopolitical strategic infrastructures can affect the way we shape realms like education, childhood and family showing possible ways rather than provide definitive answers.

Nevertheless, following such considerations, a possible interpretation of contemporary post-colonialism as a countercultural way of thinking and acting can be assumed as the indication of a space for action - be it political, cultural, artistic or epistemological. It is, in fact, the proper space for action to be acquired through the artistic practice and work by Curandi Katz, developed on this occasion in the city of Stockholm.

The publication accompanies the artistic intervention Panda Diplomacy, conceived as the outcome of a dialogue by curator Chiara Nuzzi with invited artists duo Curandi Katz in the frame of 2015 session of CuratorLab international programme at Konstfack University in Stockholm, Sweden. In the living room of a private house of Stockholm, an impromptu dubbing system is set up for a muted screening of the Japanese animation Panda! Kopanda! The house, open to the public on specific hours for the duration of four days, hosts karaoke-like sessions of dubbing: any two or three participants can dub in real-time the show into Swedish and spectators in the living room can witness the live performance adaptation of Panda! Kopanda! into Panda! Heja, Panda!. 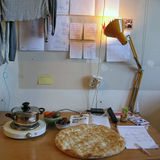