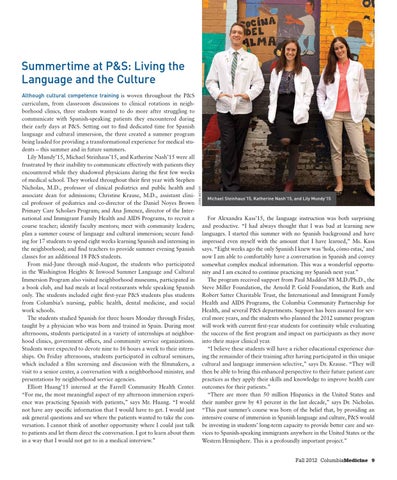 Although cultural competence training is woven throughout the P&amp;S curriculum, from classroom discussions to clinical rotations in neighborhood clinics, three students wanted to do more after struggling to communicate with Spanish-speaking patients they encountered during their early days at P&amp;S. Setting out to find dedicated time for Spanish language and cultural immersion, the three created a summer program being lauded for providing a transformational experience for medical students – this summer and in future summers. Lily Mundy’15, Michael Steinhaus’15, and Katherine Nash’15 were all frustrated by their inability to communicate effectively with patients they encountered while they shadowed physicians during the first few weeks of medical school. They worked throughout their first year with Stephen Nicholas, M.D., professor of clinical pediatrics and public health and associate dean for admissions; Christine Krause, M.D., assistant clinical professor of pediatrics and co-director of the Daniel Noyes Brown Primary Care Scholars Program; and Ana Jimenez, director of the International and Immigrant Family Health and AIDS Programs, to recruit a course teacher; identify faculty mentors; meet with community leaders; plan a summer course of language and cultural immersion; secure funding for 17 students to spend eight weeks learning Spanish and interning in the neighborhood; and find teachers to provide summer evening Spanish classes for an additional 18 P&amp;S students. From mid-June through mid-August, the students who participated in the Washington Heights &amp; Inwood Summer Language and Cultural Immersion Program also visited neighborhood museums, participated in a book club, and had meals at local restaurants while speaking Spanish only. The students included eight first-year P&amp;S students plus students from Columbia’s nursing, public health, dental medicine, and social work schools. The students studied Spanish for three hours Monday through Friday, taught by a physician who was born and trained in Spain. During most afternoons, students participated in a variety of internships at neighborhood clinics, government offices, and community service organizations. Students were expected to devote nine to 16 hours a week to their internships. On Friday afternoons, students participated in cultural seminars, which included a film screening and discussion with the filmmakers, a visit to a senior center, a conversation with a neighborhood minister, and presentations by neighborhood service agencies. Elliott Huang’15 interned at the Farrell Community Health Center. “For me, the most meaningful aspect of my afternoon immersion experience was practicing Spanish with patients,” says Mr. Huang. “I would not have any specific information that I would have to get. I would just ask general questions and see where the patients wanted to take the conversation. I cannot think of another opportunity where I could just talk to patients and let them direct the conversation. I got to learn about them in a way that I would not get to in a medical interview.”

Summertime at P&amp;S: Living the Language and the Culture

For Alexandra Kass’15, the language instruction was both surprising and productive. “I had always thought that I was bad at learning new languages. I started this summer with no Spanish background and have impressed even myself with the amount that I have learned,” Ms. Kass says. “Eight weeks ago the only Spanish I knew was ‘hola, cómo estas,’ and now I am able to comfortably have a conversation in Spanish and convey somewhat complex medical information. This was a wonderful opportunity and I am excited to continue practicing my Spanish next year.” The program received support from Paul Maddon’88 M.D./Ph.D., the Steve Miller Foundation, the Arnold P. Gold Foundation, the Ruth and Robert Satter Charitable Trust, the International and Immigrant Family Health and AIDS Programs, the Columbia Community Partnership for Health, and several P&amp;S departments. Support has been assured for several more years, and the students who planned the 2012 summer program will work with current first-year students for continuity while evaluating the success of the first program and impact on participants as they move into their major clinical year. “I believe these students will have a richer educational experience during the remainder of their training after having participated in this unique cultural and language immersion selective,” says Dr. Krause. “They will then be able to bring this enhanced perspective to their future patient care practices as they apply their skills and knowledge to improve health care outcomes for their patients.” “There are more than 50 million Hispanics in the United States and their number grew by 43 percent in the last decade,” says Dr. Nicholas. “This past summer’s course was born of the belief that, by providing an intensive course of immersion in Spanish language and culture, P&amp;S would be investing in students’ long-term capacity to provide better care and services to Spanish-speaking immigrants anywhere in the United States or the Western Hemisphere. This is a profoundly important project.” Fall 2012 ColumbiaMedicine 9 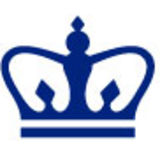