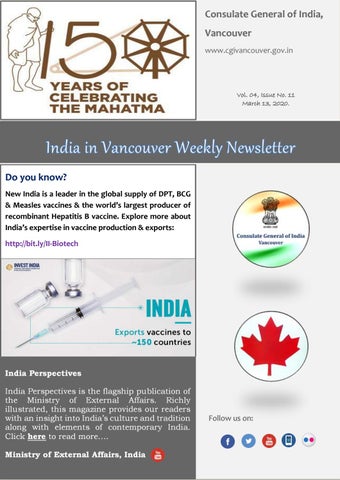 Do you know? New India is a leader in the global supply of DPT, BCG & Measles vaccines & the world’s largest producer of recombinant Hepatitis B vaccine. Explore more about India’s expertise in vaccine production & exports: http://bit.ly/II-Biotech

Pradhan Mantri Jan Dhan Yojana (PMJDY), a flagship scheme of the Government of India, was first announced by Prime Minister of India Narendra Modi on his first Independence Day speech on 15 August 2014 and launched on 28 August 2014. The scheme is financial inclusion program of Government of India which is applicable to 10 to 65 years age group, that aims to expand and make affordable access to financial services such as bank accounts, remittances, credit, insurance and pensions. On the inauguration day, 15 million bank accounts were opened. By September 2014, 30.2 million accounts were opened. On 20 January 2015, the scheme entered into Guinness book of world records setting new record for 'The most bank accounts opened in one week'. 1.9 million householders have availed the overdraft facility of ₹2.56 billion (US$36 million) by May 2016. The total number of account holders stood at 294.8 million, including 176.1 million account holders from rural and semi-urban branches. A total of 227 million RuPay cards have been issued by National Payments Corporation of India (NPCI) till August 2017. The amount of deposits rose to ₹656.97 billion (US$9.2 billion) by August 2017. PM-JDY has helped in raising women’s ownership of bank accounts from 43 per cent in 2014 to 77 per cent in 2017. For more information visit “Pradhan Mantri Jan Dhan Yojna” website, please click on: https://www.pmjdy.gov.in/

Startup India is a flagship initiative of the Government of India, intended to build a strong eco-system for nurturing innovation and Startups in the country that will drive sustainable economic growth and generate large scale employment opportunities. The Government through this initiative aims to empower Startups to grow through innovation and design. In order to meet the objectives of the initiative, Government of India is announcing this Action Plan that addresses all aspects of the Startup ecosystem. With this Action Plan the Government hopes to accelerate spreading of the Startup movement: 1. 2.

From digital/ technology sector to a wide array of sectors including agriculture, manufacturing, social sector, healthcare, education, etc.; and From existing tier 1 cities to tier 2 and tier 3 cities including semi-urban and rural areas.

Cultural Heritage - Festivals of India Kavant Gher Fair (March 13, 2020) For an unusual tribal experience, head to the Kavant Fair. This rural harvest festival is a gathering of the Rathva tribe, who dress up as gods and demons from Hindu mythology and dance wildly to the beat of drunken drumming to celebrate the joy of life. The festival takes place a few days after Holi each year. Rural Pleasure conducts a guided tour to the fair from Vadodara. Read more...

Myoko (March 20-30, 2020) If you're interested in a traditional tribal festival off the beaten track, don't miss the Myoko festival of the Apatani Tribe. It includes rituals for prosperity, fertility, purification and sacrifice performed by the village shaman or priest, and many interesting cultural elements such as folk performances and processions. Read more...

India News Section 1. ISRO's space-age women: Shooting for the moon Muthayya Vanitha and Ritu Karidhal Srivastava shot to fame last year as they became role models for youngsters in India—and girls in particular—aspiring to careers in science and technology, with a focus on space sciences. Vanitha was named project director of Isro’s Chandrayaan-2 mission, 18 months before the July 2019 launch, while Srivastava was mission director for the same project. Read more… (Harichandan Arakali, Forbes , Saturday, 7th March 2020, 10:16 am)

2. Indian-origin scientist developing robots to do tough tasks Researchers, including one of Indian-origin, have designed a system that lets robots learn complicated tasks like setting a dinner table under certain conditions, which they would otherwise find confusing with too many rules to follow. The new system, called Planning with Uncertain Specifications (PUnS) system, gives robots human-like planning ability to simultaneously weigh many ambiguous, and potentially contradictory requirements to reach end goals, according to their study, published in the journal IEEE Robotics and Automation Letters. Read more… (BDC TV, Sunday, 8th March 2020, 11:23 am)

3. International Women’s Day 2020: Meet Taniya Sanyal, India’s first woman firefighter to be appointed by AAI Born and brought up in Kolkata, Taniya Sanyal is the first woman firefighter to be appointed by the Airport Authority of India (AAI). Until 2018, AAI recruited only men as its firefighters, but the rules were relaxed last year and Sanyal emerged as the strong woman candidate to enter the field dominated by males. Read more… (Kabir Singh Bhandari , Hindustan Times, Monday, 9th March 2020, 9:18 am)

4. Karnataka gets 28 all-female Post Offices to empower women On the occasion of International Women’s Day, the government and other concerned authorities and departments took the initiative to honour and empower women achievers in their respective fields. From Indian Railways commemorating an allfemale crew of Loco Pilots who ran an express train, to inviting school girls in Buldana to take charge as the collector for one day, several initiatives were taken to motivate and inspire women. Read more… (Anannya Chatterjee, iDiva.com, Wednesday, 11th March 2020, 10:25 am)

5. DCGI approves world’s first drug to treat liver disease The Drug Controller General of India (DCGI) approved Zydus Cadila’s new drug application for Saroglitazar to treat a particular condition of liver, commonly known as Non-Cirrhotic Non-Alcoholic SteatoHepatitis (NASH) in India. The disease commences with fat accumulation in the liver known as non-alcoholic fatty liver disease and progress to cirrhosis and liver failure. The Ahmedabad-based company had launched Saroglitazar in India in September 2013 for treatment of diabetic dyslipidemia and hypertriglyceridemia in patients with Type-2 diabetes not controlled by statins alone. This disease a disease is highly prevalent across the world, affecting 10% to 30% of the global population being affected by it. Read more… (Tpci, March 6, 2020)

6. UBC engineers steer road-building breakthrough What began with a small stretch of road in the rural Indian village of Thondebhavi five years ago could soon become the next big thing in global road transportation infrastructure. That’s the potential of the pavement material pioneered by Canada-India Research Centre of Excellence IC-Impacts – based on the University of British Columbia (UBC) campus and headed by civil engineering professor Nemy Banthia. Read more… (Chuck Chiang, March 13, 202)

Arround 103 km away from Jhansi is the tourist town of Chanderi. It is famous for its ancient Jain Temples and world-renowned Chanderi sarees. Chanderi is dotted with several monuments that have been built by the Bundela Rajputs and Malwa sultans.