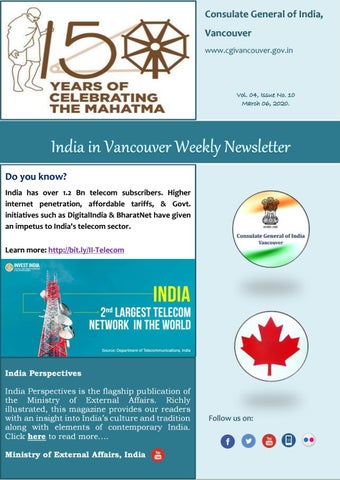 Do you know? India has over 1.2 Bn telecom subscribers. Higher internet penetration, affordable tariffs, & Govt. initiatives such as DigitalIndia & BharatNet have given an impetus to India's telecom sector. Learn more: http://bit.ly/II-Telecom

Consulate News Holi Celebrations (February 29, 2020) A colourful Holi celebration ‘Rang Barse’ was organized by Friends of India Association of BC in Surrey on 29 February 2020 featuring melodious songs, dynamic dances and lots of festivities and cheer. Consul General Mrs. Abhilasha Joshi participated in the event and conveyed Holi greetings to the gathering. She also congratulated Mrs. Vanita Puri, President and all the committee members for keeping the spirit of India alive in Lower Mainland. Mr. Amit Khanna, Assistant Vice President, Zee TV Canada was also present on the occasion.

Important Trade Fairs in India – To know more, click on

Press Information Bureau Government of India Cabinet approves the Assisted Reproductive Technology Regulation Bill 2020 Path breaking measures taken to protect women’s reproductive rights The Union Cabinet, chaired by the Prime Minister, Shri Narendra Modi has approved a historic Bill for the welfare of Women in the Country – the Assisted Reproductive Technology Regulation Bill 2020. This follows the introduction in Parliament of the Surrogacy Regulation Bill 2020, and the approval of the Medical Termination of Pregnancy Amendment Bill 2020. These legislative measures are path breaking steps to protect women’s reproductive rights. Surrogacy Regulation Bill 2020 The Surrogacy (Regulation) Bill, 2020 proposes to regulate surrogacy in India by establishing National Board at the central level and State Boards and Appropriate Authorities in the States and Union Territories. The Bill has been examined by the Select Committee and the report has been tabled in the Rajya Sabha on the 5th of February 2020. The major benefit of the Act would be that it will regulate the surrogacy services in the country. While commercial surrogacy will be prohibited including sale and purchase of human embryos and gametes, ethical surrogacy to the Indian Married couple, Indian Origin Married Couple and Indian Single Woman (only widow or Divorcee) will be allowed on fulfillment of certain conditions. As such, it will control the unethical practices in surrogacy, prevent commercialization of surrogacy and will prohibit potential exploitation of surrogate mothers and children born through surrogacy. Medical Termination Pregnancy Amendment Bill 2020 The Medical Termination of Pregnancy Act, 1971 (34 of 1971) was enacted to provide for the termination of certain pregnancies by registered medical practitioners and for matters connected therewith or incidental thereto. The said Act recognized the importance of safe, affordable, accessible abortion services to women who need to terminate pregnancy under certain specified conditions. Besides this, several Writ Petitions have been filed before the Supreme Court and various High Courts seeking permission for aborting pregnancies at gestational age beyond the present permissible limit on the grounds of fetal abnormalities or pregnancies due to sexual violence faced by women. Taken together, the three proposed legislations create an environment of safeguards for women's reproductive rights, addressing changing social contexts and technological advances.

Cultural Heritage - Festivals of India Holi (March 9-10, 2020) A major celebration in India, Holi is called the festival of colours. It generally falls in the month of March. During Holi, people smear each other's faces with colours and throw water balloons at friends and family. A fiesta of fun and food, Holi sees people coming together to exchange presents and burn a holy bonfire that marks the burning of all evil. Many signature dishes like gujiya (deep-fried sweet dumpling), dahi vada (a snack served with yoghurt), thandai (a beverage made with almonds, rose petals, watermelon kernels, cardamom), and pakora (fritters) are prepared during the festivities. Read more...

Jaipur Elephant Festival (March 10, 2020) This festival coincides with Holi, where elephants are ornamented with robes, jhools, and beautiful paintings. Grand processions of stunningly decorated elephants, camels, and horses are seen along with amazing musical performances. In the end, the bestdecorated elephant is rewarded. Undoubtedly, this is one of the most gorgeous festivals in March in Rajasthan. Read more...

India News Section 1. Back on track: India could see economic growth recover in 2020 Asia's third-largest economy, India, could rebound this year on signs of a sharp pickup in business activity in January. Consumer demand in the country still remains subdued. According to a gauge measuring so-called animal spirits, activity has accelerated for a second straight month. Most of the eight high-frequency indicators tracked by Bloomberg News held their ground last month. Read more… (RT, Friday, 28th February 2020, 8:40 am)

3. Indian-origin astronomer-led team spot exoplanet that could possibly support life An exoplanet more than twice the size of the Earth may have the right conditions to host life, say scientists led by an Indianorigin astronomer, opening the search for potentially habitable planets significantly larger than the Earth, but smaller than Neptune. Read more… (PTI, Times Now, Friday, 28th February 2020, 6:02 am)

4. National Science Day 2020 Theme Women in Science: Famous indian female scientists and their contributions The National Science Day is celebrated across the country to mark the discovery of CV Raman which famously is called Raman Effect and brought him a Nobel Prize for the same. This year’s theme for National Science Day is “Woman in Science”. India has been home to Excellence in Science since the Vedic times and women in India are nowhere behind anyone in the world. Read more… (Sentinel Assam, Friday, 28th February 2020, 6:13 am)

6. 7.8% rise in Business Confidence Index The latest survey released by National Council of Applied Economic Research (NCAER) divulges that after hitting a six-year low in August-October, India’s business confidence rose by 7.8% from the preceding quarter to 111.2. A slowdown in the economy and liquidity crunch, resulted in economic growth rate cooling to a more than six-year low of 4.5% in the September quarter. Read more… (Tpci, February 27, 2020)

7. Indian shared economy to be US$ 2bn industry The shared economy in India is poised to become a US$ 2 billion industry by the end of the year, according to a recent report by Maple Capital Advisors titled ‘Shared Economy – India Story’. The firm also said that such services attracted about US$ 3.5 billion worth of private equity, and USD 262 million in mergers and acquisitions (M&A) between 2015-19. Read more… (Tpci, February 28, 2020)

India says #NamasteTrump! US President Donald Trump and PM Narendra Modi jointly addressed the 'Namaste Trump'. The spectacular programme was organized at the world's largest cricket stadium in Ahmedabad, where thousands of people had gathered to give a rousing reception to both the leaders.

India and the US are natural partners, says PM Modi At the 'Namaste Trump' programme, PM Modi highlighted the shared traditions between India and the USA and termed both the countries as "natural partners." PM Modi said, "There is so much that we share: Shared Values & Ideals, Shared Spirit of Enterprise & Innovation, Shared Opportunities & Challenges, Shared Hopes & Aspirations."

A global comprehensive partnership between India and the US At the joint press meet with US President Trump, PM Modi said that the cooperation between India and the US was based on shared democratic values. He said the cooperation was particularly important for rule based international order, especially in Indo-Pacific region. PM Modi remarked that both the countries have decided to elevate the ties to a 'comprehensive global partnership.'

The piece de resistance of the lively Thar desert is a magnificent structure built from yellow sandstone, called the Jaisalmer Fort, Rajasthan. The magic of this architectural marvel is witnessed at sunset when the fort seems ablaze as it reflects the light from the setting sun.