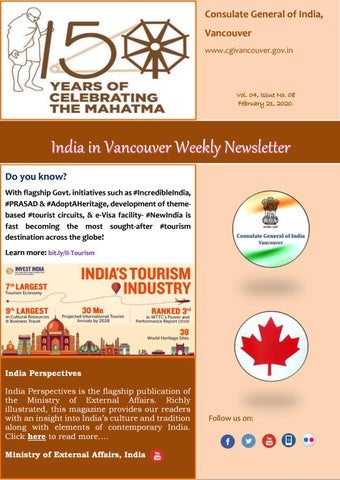 Do you know? With flagship Govt. initiatives such as #IncredibleIndia, #PRASAD & #AdoptAHeritage, development of themebased #tourist circuits, & e-Visa facility- #NewIndia is fast becoming the most sought-after #tourism destination across the globe! Learn more: bit.ly/II-Tourism

Consulate News Vishwa Hindi Diwas Celebrations (February 15, 2020) The Consulate General of India in Vancouver in partnership with 8 different organizations celebrated the Vishwa Hindi Diwas (World Hindi Day) on Saturday, 15th February 2020 at the Fraserview Hall in Vancouver. A colorful kaleidoscope of Hindi songs, Hindi poetry, Hindustani classical music and Hindi book launch was presented by children and adults as part of the World Hindi Day celebration. Vishwa Hindi Diwas is traditionally celebrated every year with an objective to promote Hindi as an International language around the world. Local organizations involved in propagation, teaching and preservation of Hindi language among Indian Diaspora around the world are encouraged to participate in the Vishwa Hindi Diwas. Members and students of Global Hindu Foundation, Literary Society of Canada, Ganesh School of Hindu Temple Burnaby, Indian Cultural Association of Vancouver, VISHWA, Canadian Hindu Foundation and Writers International Network participated in the event on 15th February. Renowned local classical singer Ms. Neeraja Aptikar also participated with a performance of two melodious classical renditions. Consul Manjish Grover kicked off the event on behalf of Consul General Abhilasha Joshi by thanking the partner associations for their participation. To commemorate the 70th anniversary year of adoption of India’s Constitution, he also read out in Hindi, the fundamental rights and duties of Indian citizens. The cultural part of the program was opened by the members of the Global Hindu Foundation who presented a song specially written for Vishwa Hindi Diwas by Acharya Shrinath Prasad Dwivedi. He also came back on stage to deliver a talk on History of Hindi Literature. But the evening belonged to remarkable individual renditions of poetry and prose by Sanvi Gandhi, Mehar Bhamra, Pratyaksha Awasthi and Veda Prabhu of the Hindi Literary Society of Canada. The bright students of the Ganesh

Important Trade Fairs in India – To know more, click on

Famous Warli Folk Painting of Maharashtra MAHARASHTRA is known for its Warli folk paintings. Warli is the name of the largest tribe found on the northern outskirts of Mumbai, in Western India. Despite being in such close proximity of the largest metropolis in India, Warli tribesmen shun all influences of modern urbanization. Warli Art was first discovered in the early seventies. While there are no records of the exact origins of this art, its roots may be traced to as early as the 10th century A.D. Warli is the vivid expression of daily and social events of the Warli tribe of Maharashtra, used by them to embellish the walls of village houses. This was the only means of transmitting folklore to a populace not acquainted with the written word. This art form is simple in comparison to the vibrant paintings of Madhubani. Women are mainly engaged in the creation of these paintings. These paintings do not depict mythological characters or images of deities, but depict social life. Images of human beings and animals, along with scenes from daily life are created in a loose rhythmic pattern. These tribal paintings of Maharashtra are traditionally done in the homes of the Warlis. Painted white on mud walls, they are pretty close to pre-historic cave paintings in execution and usually depict scenes of human figures engaged in activities like hunting, dancing, sowing and harvesting.

Stylistically, they can be recognized by the fact that they are painted on an austere mud base using one color, white, with occasional dots in red and yellow. This colour is obtained from grounding rice into white powder. This sobriety is offset by the ebullience of their content. These themes are highly repetitive and symbolic. Many of the Warli paintings that represent Palghat, the marriage god, often include a horse used by the bride and groom. The painting is sacred and without it, the marriage cannot take place. These paintings also serve social and religious aspirations of the local people. It is believed that these paintings invoke powers of the Gods. In Warli paintings it is rare to see a straight line. A series of dots and dashes make one line. The artists have recently started to draw straight lines in their paintings. These days, even men have taken to painting and they are often done on paper incorporating traditional decorative Warli motifs with modern elements such as the bicycle, etc. Warli paintings on paper have become very popular and are now sold all over India. Today, small paintings are done on cloth and paper but they look best on the walls or in the form of huge murals that bring out the vast and magical world of the Warlis. For the Warlis, tradition is still adhered to but at the same time new ideas have been allowed to seep in which helps them face new challenges from the market. Courtesy: https://knowindia.gov.in

Cultural Heritage - Festivals of India Goa Carnival (February 22-25, 2020) The colorful Goa Carnival, which began as a local feast by the Portuguese in the 18th century, has developed into the state's most famous event. During the festival, the streets come alive with parades, floats, music, and masked dances. It culminates with the Red and Black Dance, a formal ball in Panaji, where the dress code is red and black. The festivities kick off with a Food and Culture Festival in Panaji. Read more...

Where: The carnival moves from city to city (Panaji, Margao, Vasco and Mapusa) in Goa.

India News Section 1. INR 4,558 crore scheme for dairy farming The union cabinet has approved an INR 4,558 crore scheme to promote the dairy sector. The scheme will benefit about 95 lakh farmers in about 50,000 villages. It also gave green signal to the proposal to increase interest subvention from 2% to 2.5% under the scheme Dairy Processing and Infrastructure Development Fund (DIDF) with the revised outlay of INR 11,184 crore. Read more… (Tpci, February 21, 2020)

2. Kerala defeats coronavirus; India’s three COVID-19 patients successfully recover Three patients from Kerala, who were India's only positive COVID-19 cases till now, have successfully recovered from the infection as on Friday, February 14. The news of their recovery was confirmed by Kerala’s Finance Minister, Thomas Isaac, who in a Twitter post said: “Just as in the case of Nipah, Kerala has won the battle with coronavirus. All the three patients identified have been confirmed by central authorities to have fully recovered.” All three patients are medical students who returned from Wuhan, China—the epicenter of the disease outbreak. Read more… (The Weather Channel, Saturday, 15th February 2020, 11:18 am)

3. India Supreme Court makes landmark ruling on women in army India's top court has ruled that all women army officers are now eligible for permanent commissions, allowing them to be in commanding roles. The ruling means that all women officers will now be on par with men when it comes to promotions, ranks, benefits and pensions. Read more… (BBC, Monday, 17th February 2020, 10:38 am)

5. India's top court orders equal roles for women in army India's top court ruled on Monday that women could serve as army commanders, dismissing the government's stance that male soldiers were not ready to accept orders from female officers as "disturbing". The Supreme Court also ordered the government to extend permanent service - which has only been applicable to men so far - to all women officers, signalling a move towards gender parity in the traditionally male bastion. Read more… (Suchitra Mohanty, World Economic Forum, Wednesday, 19th February 2020, 10:34 am)

6. 11 Indian universities among the top 100 universities in the emerging economies of the world India's top court ruled on Monday that women could serve as army commanders, dismissing the government's stance that male soldiers were not ready to accept orders from female officers as "disturbing". The Supreme Court also ordered the government to extend permanent service - which has only been applicable to men so far - to all women officers, signalling a move towards gender parity in the traditionally male bastion. Read more… (OpIndia Staff, OpIndia, Wednesday, 19th February 2020, 10:23 am)

7. India’s rural women show the way towards a green economy In 2012, SEWA introduced solar pumps to lower the production costs and provide a clean energy option to the salt pan workers in the Little Rann of Kutch. Since then, SEWA has replaced more than 1500 diesel pumps with hybrid solar pumps. This has further enabled salt farmers to increase their incomes by halving the expenditure on diesel and increasing salt production by approximately 15 percent. Read more… (She the People, Thursday, 20th February 2020, 11:56 am)

PRESS RELEASE Conversion of PIO Card to OCI Card Indian Immigration will accept all Person of Indian Origin (PIO) cards (including handwritten PIO cards), along with valid foreign passport, as valid travel document till September 30, 2020. Indian Immigration Check Post(s) will continue to consider all PIO cards valid for exit from/entry into India till September 30, 2020. This extension of timeline is subject to the condition that if in the meantime, any deadline is notified by the International Civil Aviation Organization (ICAO) thereby making handwritten PIO cards invalid, then PIO cardholders may have to obtain appropriate visa from Indian Missions/Posts. All PIO cardholders (handwritten and machine readable) are meanwhile advised to convert their PIO cards to OCI cards. Consulate General of India, Vancouver February 19, 2020

Quantity As per tender

The details can be downloaded at free of cost from our websites (www.bheledn.com , www.bhel.com, www.eprocure.gov.in).

Nagarjunakonda island is a historical Buddhist town located near Nagarjuna Sagar in Guntur district in the Indian state of Andhra Pradesh. It was formed when a hill was submerged in the waters of the Nagarjuna Sagar Dam, constructed in the 1960s. www.incredibleindia.org

How to File Quality Complaints / Trade Disputes to DGFT? 5|P a g e