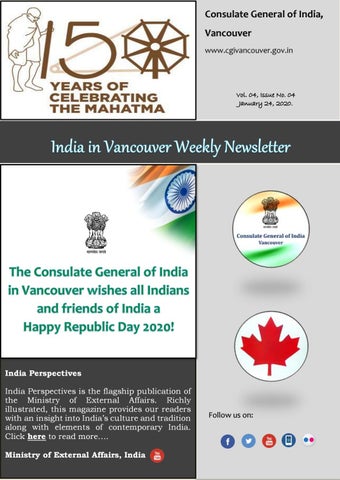 Consulate General of India Vancouver Advisory/Information for students desirous of Pursuing Medical Studies abroad Over the years, there has been an increase in the number of Indian students going abroad to pursue medical education. Earlier, all students interested in taking a medical qualification from outside India were required to get an eligibility certificate from the government before leaving for their studies. However, since 2019, the Ministry of Health and Family Welfare has made mandatory for the students to clear the NEET-UG (National Eligibility-cum-Entrance Test-Under Graduate) exam, which is the entry examination for undergraduate medical education in India, as a prerequisite to pursue medical education abroad. 2. Beginning 2019, only those students who appear for the NEET-UG for admission to Undergraduate medical education in India will be eligible to appear for the screening test, namely, the Foreign Medical Graduatesâ&#x20AC;&#x2122; Exam (FMGE). This step has been an important advancement in Screening of students and has been well received by the host countries as well. However, as the quality of education in various countries differs considerably; continued and systematic efforts in providing guidance to students regarding selection of course and institution to gain maximum academic exposure is needed. 3. As per the IMC (Indian Medical Council) Act, 1956, all students who acquire a medical qualification from countries outside India are required to clear the FMGE in order to practice in India. The Exam is conducted by the National Board of Examination (NBE) twice (i.e. in June and December) every year. 4. It may be noted that the number of students, having medical degrees from Institutions abroad, appearing for FMGE in 2009 was 6170, which has increased to 21,351 in 2018. However, the pass percentage of students appearing for the FMGE has been very low, and continued to be below 20%. NBE has published a list of country-wise performance of Indian candidates in FMGE for the period 2015-2018 (click to see the copy attached). 5. All Indian students desiring to undertake medical education abroad should take into account the above-mentioned information. In case they need any clarification about any particular institution, they may contact Indian Mission in the country where they seek to take admission. The students are also advised to visit official website of Medical Council of India (https://www.mciindia.org) constantly to know the list of accredited foreign medical institutions/universities for MBBS or equivalent courses; and other important useful information. 2|P a g e

Cultural Heritage - Festivals of India Republic Day (January 26) Celebrated on January 26 every year, Republic Day fills the hearts of all Indians with pride and patriotism. It was on this day that the Constitution of India came into force in 1950. Though India became independent on August 15, 1947, it was declared a Sovereign, Democratic and Republic state on January 26, 1950. After a salute of 21 guns and the unfurling of the National Flag by the First President of the country, Dr Rajendra Prasad, this day was recognised as the Republic Day of India and decreed a national holiday. Read more...

How is it celebrated: The celebrations of the day start with a grand parade in the national capital, Delhi. Starting from Raisina Hill near Rashtrapati Bhavan (President's House), it passes along Rajpath, India Gate, and finally stops at the Red Fort. The highlight of the event is the wreath laying at the Amar Jawan Jyoti, near India Gate, by the Prime Minister. This is done to commemorate the soldiers who sacrificed their lives for the country. Another significant event is a 21-gun salute, after which the President unfurls the National Flag. The parade starts soon after.

Vasant Panchami (January 29, 2020) One of the most popular festivals in India, it is dedicated to Goddess Saraswati. It is called Saraswati Puja in the state of West Bengal, where it is celebrated on a grand scale. Vasant Panchami falls on the fifth day of the month of Magh in the Hindu calendar, i.e between January and February. Read more...

How is it celebrated: On this day, students and youngsters worship Goddess Saraswati, who is believed to bestow knowledge upon her devotees. She is considered the symbol of learning and musical and artistic skills. Ceremonies are organised all over the country, in which children are taught to write in front of the idol of the Goddess. Traditionally, people dress in yellow and the idol is also draped in yellow or white.

India News Section 1. Turning 3000 tonnes of India's waste flowers into in incense It was winter 2015 and software engineer Ankit Agarwal noticed something disturbing in the Ghats of the River Ganges in Kanpur. People celebrating Makar Sankranti, India’s annual harvest festival, were performing suryanamaskars (yoga exercises) in polluted water. They also drank from it. But the source of the pollution, he came to discover, stemmed from an unexpected place: flowers. Some 8 million tonnes of fresh flowers, which are offered in ritual to deities in temples across the country, are dumped into rivers each year in India because they cannot be discarded — it’s considered disrespectful. Read more… (Kamala Thiagarajan, OYZ, Friday, 17th January 2020, 10:48 am)

3. Pramila Bisoyi’s journey from protecting India’s national bird to the corridors of power When newly-elected Member of Parliament from the east Indian state of Odisha, Pramila Bisoyi spoke in the House in her mother-tongue Odia, it was the subject of many jibes. The 71-year-old political greenhorn was draped in the traditional Odia attire of a Sambalpuri check sari, donned twin nose-pins, a prominent red ‘bindi’ on her forehead and sported a thin line of vermilion in her hair parting. At a time when politics is more about muscles and money, Bisoyi’s proclivity to her roots stands out in stark contrast. Read more… (Pragati Prava , Mongabay, Monday, 20th January 2020, 8:48 am)

4. Neha Juneja : Flaming fire of sustainability for the rural India is striving towards cleaner and sustainable living with a gradual change in domestic fuel consumption pattern. People are now moving away from kerosene to better cooking mediums like LPG and natural gas. A surge of 6% in LPG consumption was recorded in 2019, for 2.18 million tonnes in usage due to Government’s strong advocacy. To promote the use of cleaner fuel instead of firewood in rural areas, for reducing pollution and protecting women from health hazards.Slowly gaining pace is the Government’s dream scheme, Pradhan Mantri Ujjawal Yojana (PMUY)that provides LPG connections to poor households under Direct Benefit Transfer. Read more… (Shivani Bhandari, The Wire, Tuesday, 21st January 2020, 10:46 am)

5. Kerala electrician starts organic paddy farming; Opens India’s first ‘rice park’ In Kozhikode, Kerala, everyone recognises Jayakrishnan Thaazhathuveettil as the pioneer of organic paddy farming in the state. Partnering with his friend Leneesh K, Jayakrishnan has helped revive 118 traditional, rare and exotic varieties of paddy, many of which hold excellent medicinal properties. The former electrician has an interesting story about the starting point of his organic journey. Read more… (Sayantani Nath, The Better India, Wednesday, 22nd January 2020, 10:40 am)

6. Ground control to Major Vyomm: India unveils female robot designed for space odyssey India has showcased a ‘female’ robot that it will send into orbit in preparation for its first manned space missions. The humanoid, named Vyommitra, will also assist Indian astronauts when they make their first flight. The Indian Space Research Organization (ISRO) has given the world its first glimpse at the space-trekking bot, which will pilot the inaugural unmanned mission for the organization’s Gaganyaan program. Vyommitra is designed to simulate human functions and will provide ISRO with valuable data for its manned flights, which are scheduled to begin in 2022. Read more… ( RT, Thursday, 23rd January 2020, 1:56 am)

How to File Quality Complaints / Trade Disputes to DGFT? 4|P a g e

Designed by British Lieutenant-Colonel Sir Michael Filose under the aegis of Maharaja Jayaji Rao Scindia, the palace is inspired by several European architecture styles. The 1st storey of the palace is Tuscan, the 2nd, Italian-Doric & the 3rd draws ideas from Corinthian design. www.incredibleindia.org

Do you know? India is the world's #1 centre for cutting & polishing diamonds & one of the world’s largest exporters of gems & jewellery. Learn more about various #FDI policies & investment opportunities in #NewIndia’s Gems & Jewellery industry: bit.ly/II-Gems