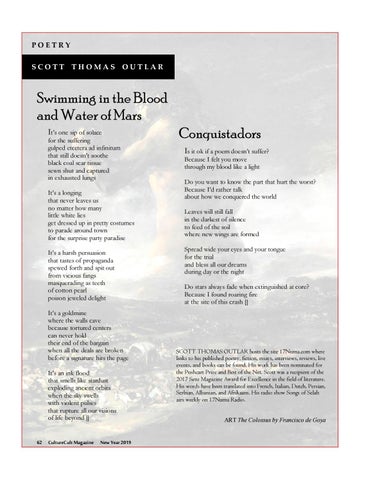 Conquistadors Is it ok if a poem doesn’t suffer? Because I felt you move through my blood like a light Do you want to know the part that hurt the worst? Because I’d rather talk about how we conquered the world Leaves will still fall in the darkest of silence to feed of the soil where new wings are formed Spread wide your eyes and your tongue for the trial and bless all our dreams during day or the night Do stars always fade when extinguished at core? Because I found roaring fire at the site of this crash []

SCOTT THOMAS OUTLAR hosts the site 17Numa.com where links to his published poetry, fiction, essays, interviews, reviews, live events, and books can be found. His work has been nominated for the Pushcart Prize and Best of the Net. Scott was a recipient of the 2017 Setu Magazine Award for Excellence in the field of literature. His words have been translated into French, Italian, Dutch, Persian, Serbian, Albanian, and Afrikaans. His radio show Songs of Selah airs weekly on 17Numa Radio. ART The Colossus by Francisco de Goya

This is the 10th issue of the acclaimed journal of the Arts, Literature and Culture. The False Spring Issue (New Year 2019) features 14 poets from around the world, besides 8 works of fiction and an original drama text. Our featured articles include a feature on the glorious starlet of yesteryears Doris Day and an opinion piece on workplace bullying. This issue also marks the beginning of our regular columns 'Easel De Kolkata' and 'Cult of Fear', the latter appreciating the finer nuances of Darren Aronofsky's 'mother!'.As usual, CultureCult Magazine is graced by the artworks of modern and classic artists alike including Francisco de Goya, James Abbott McNeill Whistler, George Inness and the controversial Emil Nolde. 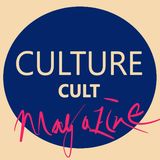