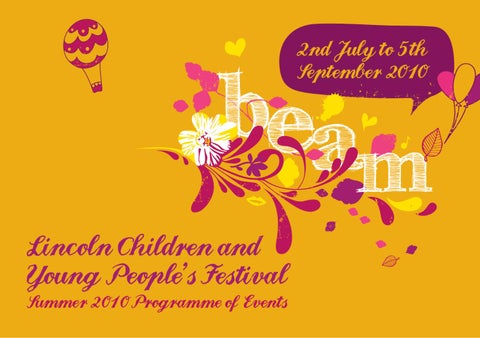 Finally... a whole year since the last one... Beam! 2010 launches with a week of celebrations targeting the whole family! Look out for Beam ! 2010 on the streets of Lincoln City Centre. Look out for funny people doing funny things !

beam ! 2010 festival From Friday 2nd July and throughout the following week there will be theatre and puppet shows for the under 5s; showcase events for 31 Lincolnshire schools, not to mention stand up comedy for young people aged 13 and over, and the east Midlandsâ&amp;#x20AC;&amp;#x2122; debut of Irish band, General Fiasco! Following on from the launch weekend is a programme of events that runs through to early September. Beam! is brought to you by the Lincoln Business Improvement Group, who are committed to offering visitors to Lincoln city centre great events and promotions; from artists and crafts markets to music festivals, not to forget the Winter Ice Rink! Thereâ&amp;#x20AC;&amp;#x2122;s just about something for the whole family all year round. Have a great time in Lincoln this summer!

the streets are alive

Over a 48 hour period the streets of Lincoln city centre come alive to a vibrant mix of street theatre, virtuoso performances, street dance, samba playing, storytelling, and the downright weird and wonderful.

Fairly Famous Family – Anyone for Tennis

Wimbledon comes to Lincoln with a pristine court, dead posh umpire and highly strung players looking to take on all comers. An hilarious but thrilling “one setter” will be played out live before an enraptured crowd with all the drama of Centre Court including slow motion replays, heated line calls and live commentary.

Feet First Entertainment Ady Lee will be on the streets clowning, juggling and much more.

Inner State The Duchess of Wormwood, accompanied by Raddle the Jester, will be scouring the City on their Hobby Horse to collect jokes to keep Pen Dragon amused. Storytelling, loud mouthed puppets and comic capers!

Grumpy Granny, Amazed by Everything Granny, Cheeky Granny and Anything Goes Granny, are all trying to escape from their... ‘I care about caring INIT’ carer Roxy who takes them out into Lincoln town for the day!

The Grannies Anyone for tennis

BG Touring The Chefs Comedy street theatre involving juggling, stage fighting, lots of humour and a ‘La Demonstration’, that goes terribly wrong! We have Sleazy Chef, Head Chef, Mr. Muscle Chef and last but not least Dopey Chef - be sure to watch out for them Jamie and Nigella will not be present.

BG Touring The Red Sparrows Welcome aboard flight…1 with the infamous cabin crew known as the Red Sparrows. Learn all about cabin safety and be regaled with songs and comedy. If anything can go wrong you can bet it will happen here. Then, when the entertainment system breaks down the sparrows must ‘improvise’ to keep their passengers happy… Not to be out done, look out for The Red Arrows doing the real thing over the streets of Lincoln this summer.

BG Touring Samba The Samba Band is energetic, hyperactive, loud and fun, sure to put a smile on your face! The music they make will be sure to get your body moving and feet tapping.

Joy Pitt Storyteller Joy is an enchanting storyteller. She will be offering a variety of Folk, Fairy and Wonder tales from around the world. Come and enjoy the ancient art of Storytelling.

Bell and Bullock No Flies On Uzzz and Pirates, Parrots, Sirens and Seahorses Aristotle and Felicity Bluebottle, two charming and cultured flies, will be buzzing around Lincoln. Experience the world through the eyes of a fly and watch their fascinating mating dance. Be prepared to share your snacks or swat them before they swat you! Also… don’t miss the Pirates, Parrots, Sirens and Seahorses. The Captain rides a giant parrot in a quest for romance and birdseed, whilst the gorgeous mermaid, in her seahorse drawn chariot, flirts with passing handsome sailors.

Streetz Ahead Streetz Ahead Theatre Artz will show performances in Musical Theatre &amp; Street Dance. Children aged 6 - 15 years will show some of the work they create within their weekly performing arts classes, whilst the teenage and adult dance groups perform street dance medleys.

All performances are free

All performances are free

Tales from the Heartwood

Tales from the Heartwood

Tales from the Heartwood Bell and Bullock

Theatre for Children This year Beam! 2010 is offering two performances for young people and their families at the Collection Museum. We are very pleased to welcome Lempen Puppet Company back to Lincoln, and to host Tell Tale Hearts Theatre Company with their new show ‘From Here to There’, a piece which is a perfect introduction to the magic of the theatre for 18 months to 4 years.

Lempen Puppet Company returns to Lincoln with their new show Ugly Beauty. In the Kingdom of Rumours lives an unhappy princess. Princess Suzanna the Beautiful. But why is she so sad? And what in the world will make her happy? Only Melodius, the unusual musician, has the gift to unlock the truth behind the golden mask. A theatrical performance using acting, puppets, shadows and music for everyone from 5 to 10 years young.

From Here to There

A show that’s all about ‘building’ bridges! That’s full of the joy of building and knocking down, climbing over and crawling under, of hiding, of surprising and peek-a-boo! A show to make you smile! A smile is a bridge from ear to ear! Using gentle percussive music, objects and the world of the imagination, two quite independent individuals discover ways to find and reach each other. For children aged from 18 months - 4 years. Please note tickets are limited for this production to ensure an intimate setting can be created.

The BIG Schools Programme Come support the 31 Lincolnshire Schools who travel from all over the county to perform for you from 5th –9th July. Now in its 6th year, the Schools Programme is much loved by both Lincoln’s residents and city centre shop-owners and provides a unique platform for Lincolnshire’s young talent.

Around the world with 68 children

What does it take to build a world

Dancing Around the World

Songs from the 60s

Everybody Hurts, Man In The Mirror &amp; Pirates

A World of Dance

Summer Beamival New for 2010 is a programme of events just for you. We are beaming down to Lincoln one of the finest new bands around, not to mention top comedians! There is also the chance to make your own music and manga comics.

Danny McLoughlin has sharp wit, top material, likeable persona and strong stage presence that has seen him become a much sought after act in his short time as a stand up. A finalist in the Chortle Student Comedian of the Year 2008, he went on to perform as part of the prestigious Big Value Comedy Show during Edinburgh Festival 2009. Chris Ramsey was recently seen on Russell Howard’s Good News Show on BBC3 and has supported Lee Mack, Russell Howard and Russell Kane. He’s also about to be tour support on the forthcoming Al Murray UK Tour. Watch out! Matt Forde has a quick wit and an infectious laugh. He is currently performing stand up on The UK circuit and had a regular weekly host on thw Jon Richardson Show on BBC 6 Music. Matt did his first comedy gig aged 16 and he regularly hosts his own show in Edinburgh. He is a regular guest on Radio 5Live with Richard Bacon and can be heard on TalkSport. (AGE 13 PLUS)

General Fiasco is an indie rock group from Magherafelt, Northern Ireland. Since their formation in 2007, they have toured with Fighting With Wire, The Wombats, One Night Only, The Pigeon Detectives, The Enemy and are currently on tour with Kids In Glass Houses. They recently released their debut album, Buildings. The band was invited to play at the 2008 Reading &amp; Leeds festivals as part of the BBC Introducing line-up. Their appearance was picked by NME as one of “the ten hopes for the near future.” Since then they have been part of the BBC Introducing line-up at the Electric Proms in October 2008. Their single Rebel Get By received plays from Zane Lowe, Steve Lamacq, Colin Murray, Huw Stephens, John Kennedy, Jenny Huston and Sara Cox and was playlisted at Xfm. On 1 March 2009 they supported Snow Patrol at the Odyssey Arena in Belfast. General Fiasco will be supported by Full Tank and another local band. (AGE 13 PLUS)

We seriously advise you to book early for this event

Fed up of listening to DJs and Producers online or on the radio knowing you can do better? Then maybe it’s time to make your own music. Shirley Novak is at the top of her game. Shirley has been making music for a long time and will show you how to effectively use various software packages such as Apple Logic 8/9 and Pro Tools LE 8. This two-hour session will give you a basic idea of what it takes to make your own music. By the end of the session you will know what is expected of you should you want to take it to the next level.

How To Write Manga

Al Davison is an cartoonist who was born with spina bifida doctors thought he would never walk - and his highly-acclaimed graphic novel The Spiral Cage chronicled growing up and struggling to be accepted as a whole person. Despite his disability he’s studied martial arts for 30 years, he is a celebrated cartoonist and runs a comics shop in Coventry called The Astral Gypsy. Al has been working on DC Comics’ Dr Who for the past two years. Today he explains the intricacies of writing and drawing manga.

“The Spiral Cage is an important addition to the ranks of comic books that strive to break out of the conventions of the genre”. Alan Moore (AGE 13 PLUS)

Come and join us a the beach Lincolnhaving by thetosea... without drive anywhere! Take a trip to the seaside in the heart of Lincoln! City Square will be transformed into a beach so bring along your bucket and spade and get making those sandcastles! Even better, take advantage of the fabulous travel discounts from Skegness offered by S tagecoach.

HALF PRICE Travel Voucher Find your HALF PRICE travel voucher to Lincolnâ&amp;#x20AC;&amp;#x2122;s beach on the last page of this brochure

City Square activities Lincoln city centre is bursting at the seams this summer. So whether you need a break from the shopping or looking to do something with the family, head this way! Activities daily 10am to 4pm. Times may vary. Please visit www.lincolnBIG.co.uk for full programme.

FROM STAGE TO SCREEN West End stars, with all your favourite songs

Stars from ‘Whose Line Is It Anyway’ and the ‘Comedy Store Players’ live on stage!

Visit Lincoln by the sea... HALF PRICE FAMILY

DAY OUT TICKET Offer valid between 16th August to 5th September 2010. Family ticket can only be purchased with a voucher on buses that start their journey in Chapel St Leonards, Ingoldmells, Butlins, Winthorpe and Skegness. Each voucher entitles the holder to a half price Family Day Out Ticket, normal price ÂŁ16.50 - offer price ÂŁ8.50. The Family Day Out Ticket is valid for unlimited travel from Skegness on Stagecoach buses on the day of issue for up to two adults and three children only. Terms and conditions apply.

Simply cut out the voucher above, present it to one of our Stagecoach bus drivers and receive a HALF PRICE family ticket to the beach in the heart of Lincoln!

beam! 2010 ran from 2 to 9 July and offered Lincoln city centre's vistors a wide cross-section of street theatre, indie rock concerts, children's theatre, participatory workshops and a lot of fun for the whole family,