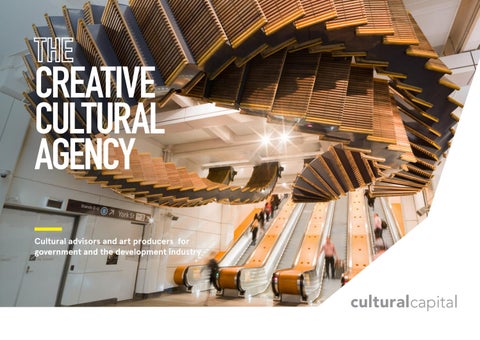 WYNSCREEN 2017 WYNYARD WALK In 2016, Cultural Capital was contracted as the Urban Design Enhancement Consultant by Transport for NSW for major new connective infrastructure works taking place at Wynyard Station. The result of our work on this project is a dramatic addition to art in Sydneyâ&amp;#x20AC;&amp;#x2122;s public domain, and the cityâ&amp;#x20AC;&amp;#x2122;s most dynamic site for digital and moving image art.

Nancy Liang and Baron Chau, Past Journeys of the Near Future, 2017

Wynscreen is a 23 metre long LED screen showcasing works by internationally renowned and emerging Australian artists, seen by thirty thousand commuters a day. Cultural Capital curated, commissioned and programmed the entire collection of eighteen works in partnership with our guest moving-image curator Alessio Cavallaro. Cultural Capital typically commences significant and innovative art projects of this nature with a feasibility study that researches the opportunities, analyses the site and considers its public usage. Implementing the project requires us to develop the art strategy, curate the program, commission the artists, provide technical direction, oversee delivery of the artworks, and manage the project and its stakeholders.

Commissioned by Transport for NSW and designed by Woods Bagot, Wynyard Walk is a pedestrian link connecting Wynyard Station with Barangaroo. The walk integrates with the digital art centrepiece, Wynscreen. Wynyard Walk has been nominated for several prestigious awards, including:

Yarrenyty Arltere Artists and Leonardo Ortega, The Worlds We Stitch Together, 2017

This program will elevate Sydney’s place as a global city and deliver a legacy to the people of NSW that will go on giving for decades; creating identity, delighting citizens, increasing well-being, attracting visitors, enlivening public domain and generating financial benefits. Producing this type of art and cultural masterplan utilises all of Cultural Capital’s capabilities. Effective cultural masterplans are a judicious blend of operational pragmatism and the aspirational vision necessary to ensure that infrastructure projects deliver both modern functionality and cultural wellbeing.

CURATING IN THE PUBLIC REALM

SCULPTURE BY THE SEA 2015 AARHUS In 2015, Denmark’s Sculpture by the Sea, Aarhus attracted in excess of 500,000 visitors to view the works of sixty exhibiting artists. A bi-annual event since 2009, the event, initiated by the Danish Royal family in partnership with SxS Sydney, has been instrumental in positioning Aarhus as a cultural hub.

Cultural Capital’s Curatorial Director spent months in Denmark working in collaboration with Danish project partner ArOS. The review of hundreds of submissions, leading to selection of sixty artists and the final design of the exhibition within the distinctive landscape of Aarhus was an enormous challenge, matched only by the necessity to adapt the plan to inevitable event changes, proving the robustness and flexibility of our approach. Curating art in the public realm and for outdoor cultural events demands a skill-set offered by very few organisations worldwide. Cultural Capital’s experience in this domain is unique, gained by our principals over multiple years of curatorial, logistic, engineering and artist participation in Sculpture by the Sea events in Sydney, Perth and Aarhus.

INTERLOOP CHRIS FOX 2017 WYNYARD STATION Interloop hovers in the void at Sydney’s Wynyard Station. Chris Fox’s sculpture reconfigures the heritage escalators that operated here since the 1930’s. This artwork takes a physical element known to generations of Sydney commuters and renders timeless that particular piece of Sydney’s cultural heritage, at the same time cementing it in our collective memory. As art strategists and curators for the project, Cultural Capital’s long association with this site gave us a detailed understanding of the environment of Wynyard Station; its meanings for Sydney’s commuters, the way its spaces work and its histories. When we work with art in the public realm we develop intimate relationships with the places in which we work. More often than not, art in the public realm is responsive to an important element of the place in which it is sited; an aspect of its geographic, historic or cultural landscape. Often a heritage component brings additional meaning and resonance into the relationship between art, place and people. Interloop won the inaugural Outstanding Project of the Year award at the National Trust NSW 2018 Heritage Awards.

EBB AND FLOW MARK MCCLELLAND MASCOT 2018 Ebb and Flow was commissioned by Bridgehill for the Esprit Apartments development at Mascot. The landscape responsive sculpture by Cultural Capital’s Creative Director Mark McClelland acknowledges the importance of water, specifically the Botany aquifer, in the evolution of this part of Sydney. Fabricated from low-carbon steel plate, the artwork’s materiality echoes Mascot’s twentieth century industrial heritage. In responding to the site’s contemporary evolution, the artwork’s long, spiralling form creates a counterpoint to the surrounding rectilinear built forms. The design of the sculpture enables people to move through it and even sit on it, encouraging a direct interaction between people and artwork that brings a human touch to this development. As a creative and production team, Cultural Capital benefits from the award winning artist and engineering skills of principals Mark McClelland and Harry Partridge, whether creating artworks with our in-house team or commissioning from our extensive network of Australian and international artists.

THE RIBBON 2017 DARLING HARBOUR In 2017 Cultural Capital was commissioned by Grocon to author a public art strategy for their new six-star hotel development, The Ribbon. That strategy has now been approved by the NSW Department of Planning as satisfying the cultural component of the development approval for the project, a high-design 25 story hotel building in the heart of Darling Harbour. The strategy encompassed analysis of heritage, branding and site; curatorial approach; commissioning, procurement and delivery models; management of multiple stakeholders; integration with architecture and design teams and submissions to the NSW Department of Planning. Cultural Capitalâ&amp;#x20AC;&amp;#x2122;s work now proceeds to implementing the project. The ability to author unique and compelling cultural strategies is at the core of our capabilities. Cultural Capital is currently involved in the development of art strategies and cultural visions for several urban development and infrastructure projects on behalf of both government agencies and development companies.

Our work helped the newly merged Queanbeyan-Palerang Regional Council: • Establish a regional identity • Develop the region’s first economic strategy • Create an urban design brief for the city of Queanbeyan’s CBD • Match council’s service delivery to resident expectations Engagement is an important and evolving domain of urban development. Stakeholders and communities seek increasing levels of voice in projects that impact upon them. Understanding and managing that context is a key competency for Cultural Capital. We have developed our own in-house process of Cultural Mapping which fuses strategic facilitation, art process and best-practice engagement tools to enable citizenries to co-create the futures of their own environments.

Co-founder of Cultural Capital, Mark is an awarded sculptor and design director. Mark undertakes public art projects, writes art strategies and is a blogger and speaker on the relationships between art, culture and place.

Amanda leads multi-stakeholder teams to plan, curate and deliver large art and cultural projects for major government and commercial clients. She authors art strategies and draws from her extensive network to match the right artists with each project.

Mark previously founded and led the creative agency DesignTroupe. The firm won more than thirty design awards and expanded its reach into the US and Europe before becoming part of the PWW Group where Mark went on to build a network of creative agencies for the organisation throughout Asia. Mark has graduated from the College of Fine Arts; Sydney Institute of Design; the University of New England and the Sturt School. Mark has been awarded the prestigious sculpture prize at Sydneyâ&amp;#x20AC;&amp;#x2122;s iconic Sculpture by the Sea. 24

Harry founded our structural engineering associate Partridge, which has worked on many of Australiaâ&amp;#x20AC;&amp;#x2122;s most prominent public sculptures. Harry continues to use his skills in working with artists and curators to design, certify and commission significant public art installations. Harry graduated in engineering from Sydney University before undertaking a Masters in Engineering at UNSW. Harry is a Fellow of the Institution of Engineers, Australia; a Member of the Institution of Structural Engineers, UK; and was awarded the Gold Medal in 2017 by the Association of Consulting Structural Engineers. He has recently completed a Masters in Fine Art at the College of Fine Art, UNSW.

With more than a decade of experience, Amanda has demonstrated the ability to deliver large projects on time, within budget and in accordance with the unique complexities of major clients. Highlights include delivery of Wynscreen, a major public art project for Transport for NSW at Wynyard Station; a cultural strategy for City and Southwest Metro; and current leadership of the public art program for the new M5 motorway. She has a background in the visual and performing arts and holds a Masters in Arts Management from UNSW.

Drenka’s background in construction and the strength of her project management company Construction Assignments provide Cultural Capital’s clients with surety of delivery in any context. Drenka brings a detailed understanding of the needs of all levels of the property development industries.

Cathy provides artist and administration support, as well as leading research for our cultural think tank. Her background is as a multidisciplinary artist working across photography, sculpture, drawing and painting.

After graduating from UTS as a civil engineer Drenka gained extensive experience in clientside project management, working for 15 years at AMP Property Investments and Accor Hotels before establishing Construction Assignments in 2006, and joining Cultural Capital in 2015. Drenka has received awards including: NAWIC, 2011 CB Richard Ellis Businesswoman of the Year and UTS 2011 Alumni Award, Faculty of Engineering and IT. Drenka is current Chair of the NSW Hotel Property Committee, Property Council of Australia.

Bethan Donnelly has extensive experience in the arts, museum and galleries sector and has worked closely with many of Australia’s leading artists and curators. Bethan graduated from UNSW in 2011 with first class Honours in Arts. Her academic interests include a strong emphasis on local histories and culture. Bethan has been a previous recipient of the NSW Public History Prize, the Tundzha Regional Archaeology Project scholarship, and appeared as a speaker at the 2012 History Week. She is currently completing her Masters of Curating and Cultural Leadership at the University of New South Wales – Art and Design.

Cathy has been a finalist in art prizes including the Mosman Art Prize, Chippendale New World Art Prize, and the Fishers Ghost Art Award at Campbelltown Arts Centre. In 2013 Cathy won the photography section of the Fishers Ghost Award. Cathy undertook her Bachelor of Visual Arts at the University of South Australia where she was invited to take part in the National Graduate Exhibition at the Perth Institute of Contemporary Art and completed a Masters of Art at the University of New South Wales – Art and Design. 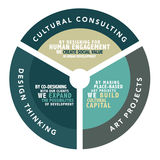