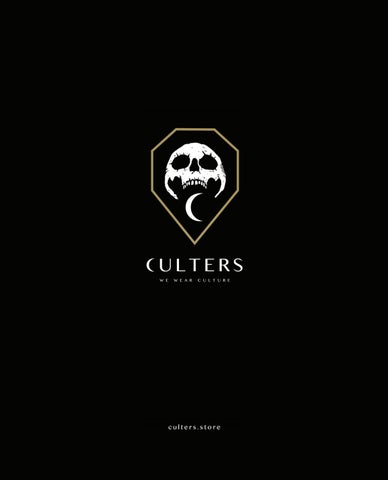 SPIRIT OF REBELLION. IRREVERENT SPIRIT Culters, our pride, our alternative unisex dress code for rebellious and free spirits with irreverent attitude inspired by cultural heritage and ancestral historical events. An exciting journey through the immense melting pot of cultures of the world, an encounter between civilizations, where you can look from one end to the other of the horizon, beyond borders, recalling fragments of ancient history, mythologies, legends, songs, folklore and oral tales. Through our iconic designs and garments we will enter worlds governed by gods and nature, where totems, sacred animals, kings, emperors, warriors, artisans, sorcerers, alchemists, sailors, discoverers, conquerors, adventurers, outlaws, marginalized, outsiders, liberators, heroes and anti-heroes, almost all cursed, will be the protagonists. As travellers and lovers of the distant past, we wanted to capture all that vast heritage in a tolerant and integrating signature style, capable of transforming the old into the new. And thus being able to dress and remember those remote cultures, banishing barbarism and hatred, looking towards the cultural heritage with respect and peace, but also with an acidic and scathing criticism.

THE SKULL & THE NEW MOON That is why we adopted the millenary mocking Skull that appeared in the old traditions of satirical poems that ridiculed making social criticism and protest against tyranny. Those bones and tombstones, that wounded earth also whispered to us ancient stories that we wanted to evoke, so many beautiful and amazing, but too many dyed with blood and iron. And just as the ancient Celts believed that their crops should be reborn, we made our own the New Moon, daughter of the mother goddess, of mysterious feminine powers, as an opportunity to be born again â&#x20AC;&#x201D;to start over againâ&#x20AC;&#x201D; in search of a new common Kulture. This is how Culters was conceived, for those who yearn for those old melodies, for the audacious and intrepid souls who wish to venture into new, sometimes clandestine, mysterious and hidden destinations, for all those crazy for life who wish to wear exclusive designs with a fresh and daring air.

BE SEDUCED BY THE IRREVERENT SPIRIT Culters, our pride, our alternative unisex dress code for rebellious and free spirits with an irreverent attitude inspired by cultural heritage and ancestral historical events. Legendary Essence: Mythic and ancestral worlds, stories of legend, melting pot of cultures, praise of freedom, treasures of the soul. Light is born from Black: Variations of black and grey tones combined with the intensity of Gold, the identity of CULTERS. The Ritual of Beauty: The chord of energy, creativity and heart, the emblem of each design, each detail chosen carefully keeps the secrets of an exclusive product, designed to enjoy an iconic and timeless comfy garment, that is soft to the touch and respectful with the environment. Play ancient melodies now, Culture should not wait!!

CULTERS COLLECTIONS Warriors Disciplined Centurions, exotic Maories, furious Spartans, immortal Persians, fearsome Vikings... Warriors of the world who have changed history. Idealists and mercenaries faced in cruel and unjust wars. Acts of heroism, bravery and honor get dirty with the most despicable and ruthless actions of the human race... Cult The mystical and spiritual face has been present on earth throughout the ages. That world of the dead and the living intermingles in a universe full of gods, animal deities, temples, shamans, druids, magicians, sorcerers and pythonesses where the hidden, the mysterious, the enigmatic, the symbolic and the religious make up the breath sacred of men, the soul connected with nature, the vital force that drives us... the anima mundi. Outlaws Outlaws, intrepid, reckless, arrogant, proud, courageous, adventurous, thieves, many of them, with an air of almost everyone. They were loyal and servants but disenchanted and abandoned in the end. They sought glory, regardless of society and the law, always guided by their code of honor, were persecuted, stabbed, banished and executed. Some returned... "Soldiers" of Fortune, full of wisdom but with rusty armor, mutilated, desperate, tired and full of regrets... This is the enigmatic and extraordinary life of the forgotten antihero...

Outlaws of the Sea

The Children of the Sun

Gladiators against the Empire

The Twilight of the Warrior

The Children of the Sun II

The alchemy of the Soul II

The Eye of the Pharaoh

The alchemy of the Soul

The Dance of the Snake

The Cult of the Leopard

The Cult of the Leopard II

Echoe from the Past

A World full of Gods

THE 6 ESSENCES OF CULTERS Sustainability: Made of 100% ring spun good quality soft cotton. Sustainably grown and ethically harvested. Durability: The fabric is soft and resistant, it doesn't fade shrink as long as the washing instructions are heeded. Eco Friendly: The coloring materials are ecological, certified and safe. They are not a risk to human health. Creativity: The designs are unique. Made by hand by recognized illustrators and digitized with the best techniques to achieve a high quality finish. Genuine Responsibility: Caring for people, Conserving the environment and Creating stronger communities. Transversality: Knowledge, respect and Integration of all the World Ancestral Cultures. 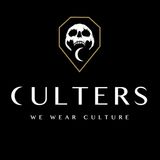 Culters, our pride, our alternative unisex dress code for rebellious and free spirits with an irreverent attitude inspired by cultural herit...

Culters, our pride, our alternative unisex dress code for rebellious and free spirits with an irreverent attitude inspired by cultural herit...