A Start on affordable diabetes care 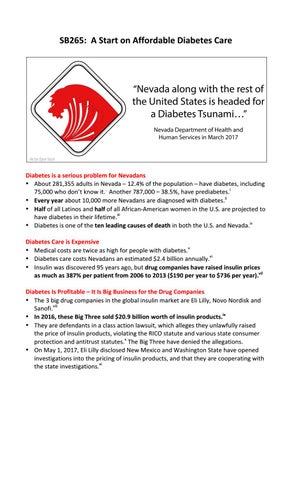 Diabetes is a serious problem for Nevadans • About 281,355 adults in Nevada – 12.4% of the population – have diabetes, including 75,000 who don’t know it.. Another 787,000 – 38.5%, have prediabetes.i • Every year about 10,000 more Nevadans are diagnosed with diabetes.ii • Half of all Latinos and half of all African-American women in the U.S. are projected to have diabetes in their lifetime.iii • Diabetes is one of the ten leading causes of death in both the U.S. and Nevada.iv Diabetes Care is Expensive • Medical costs are twice as high for people with diabetes.v • Diabetes care costs Nevadans an estimated $2.4 billion annually.vi • Insulin was discovered 95 years ago, but drug companies have raised insulin prices as much as 387% per patient from 2006 to 2013 ($190 per year to $736 per year).vii Diabetes Is Profitable – It Is Big Business for the Drug Companies • The 3 big drug companies in the global insulin market are Eli Lilly, Novo Nordisk and Sanofi.viii • In 2016, these Big Three sold $20.9 billion worth of insulin products.ix • They are defendants in a class action lawsuit, which alleges they unlawfully raised the price of insulin products, violating the RICO statute and various state consumer protection and antitrust statutes.x The Big Three have denied the allegations. • On May 1, 2017, Eli Lilly disclosed New Mexico and Washington State have opened investigations into the pricing of insulin products, and that they are cooperating with the state investigations.xi

What Has PhRMA Done This Session? • Point fingers at others while admitting they set the price. SOMETHING HAS TO CHANGE. • Funded groups like the National Minority Quality Forum – which received $1,071,000 in contributions from PhRMA from 2013 to 2014. Other nonprofits receiving big contributions from PhRMA include Easter Seals Inc., the Lupus Foundation of America, Inc. and the NAACP. • Hired a lot of lobbyists but refused to negotiate – at least 50 have been sighted in the building – and probably in your office! • Hide behind their patents as federal protection to create any prices they want.

SB265 Addresses Price Increases and Transparency: • Establishes a list of essential insulin-related diabetic products to be treated as essential medicines. • Creates a refund for individuals and plans when insulin costs exceed medical CPI. • Requires transparency on insulin drugs – including how prices are set, including the cost of these medications, the amount spent on marketing, and the amount of research paid by public institutions. • Creates a registration and reporting process for pharmaceutical reps—much like registration for lobbyists— similar to programs in Chicago and Washington DC. • Requires nonprofit entities that are funded with pharmaceutical money to disclose that information. SOMETHING HAS TO CHANGE: 2017 LEGISLATIVE DEVELOPMENTS • Efforts to address prescription drug costs have been filed in nearly half of the states – including Arizona, California, Connecticut, Florida, Hawaii, Illinois, Indiana, Maine, Maryland, Massachusetts, Minnesota, Nevada, New Hampshire, New Jersey, New York, Oregon, Puerto Rico, Rhode Island, Tennessee, Texas, Utah, Vermont, Virginia and Washington.xii i

A Start on affordable diabetes care 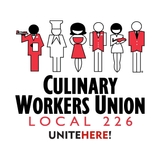