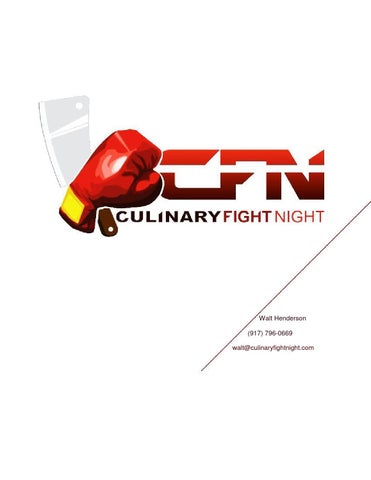 WHAT IS CULINARY FIGHT NIGHT®? Almost five years ago, a very interesting event was born. This very unique experience, intended to highlight local chefs and their culinary skills as well as bring awareness to various local foundations and charities, has become a huge success. Once again, it’s time for Culinary Fight Night®; “Where Cooking and Competition Collide!”

Culinary Fight Night® is an interactive cooking competition that pairs local chefs, head to head in a Vegas style boxing ring setting where they will compete for an array of prizes. Via www.culinaryﬁghtnight.com, guests are asked to RSVP and then vote for a secret ingredient. Our two teams of chefs will take the 3 ingredients with the most votes to the full scale boxing ring to ﬁght it out! The chefs will be required to prepare a 3 course meal for all guests as well as a star studded celebrity judging panel using these ingredients. Each course will be scored in three categories; Taste, Creativity, and Presentation. In the end, the team leader with the most points will win a customized CFN® Championship Belt, the title of Culinary Fight Night® Champion and a cash prize, half of which will be donated to their charity of choice.

What separates Culinary Fight Night® from other cooking events is the high emphasis on charity. Our live audiences have had the pleasure of assisting such charities as the Careers through Culinary Arts Program, the Do the 2 Walk for Breast Cancer, the National MS Society NYC Chapter, Genesis Family Shelter of Atlanta, the Sickle Cell Foundation of Ga., St. Jude’s Children’s Hospital, Dinner For Kids Foundation, The Ludacris Foundation and the Alzheimer Association, just to name a few. Inside of this package, you will also ﬁnd a wealthy list of local celebrities that have donated their time to Culinary Fight Night® and our benefactors over the years. Our unique combination of entertainment, star power, location and philanthropy not only have contributed to our immediate success, but also have made Culinary Fight Night® truly unparalleled by today’s culinary competition standards.

KEY POINTS Locations: Culinary Fight Night® will introduce their inaugural “Continental Championship Tour” this summer. On this tour, CFN will make strategic stops in NYC (June 1-6), Miami (June 23-26), Seattle (July 21-24) and Los Angeles (Aug 11-14) in order to produce a bracket series of cooking competitions. In each city, 8 teams of local chefs will compete head to head inside of a full scale boxing ring and prepare a gourmet 3 course meal for our panel of celebrity judges as well as a live audience. After a series of 7 competitions, one chef will be declared CFN’s Regional Champion in their respective city. Once all four regional champions are selected, our semi-finalists will travel to Las Vegas where they will be battling it out for $50,000 to share with their charity of choice. During this tour, we will be partnering with several production companies and compiling all footage from our events in order to produce a sizzle reel. Once completed, CFN’s will begin the necessary steps to partner with a television network. Comparable Events: Culinary Fight Night® has a demographic that is very similar to that of many comparable large scale food festivals that take place annually around the country (The Taste of DC, The Taste of Atlanta, The Food Network’s Food and Wine Festival and Cochon 555). We offer the “ultimate foodie” a unique combination of entertainment, star power, location and philanthropy that has not only contributed to our immediate success but also has made Culinary Fight Night® truly unparalleled by today’s culinary competition standards. Operating Expertise: The management team at Culinary Fight Night® has a vast array of experience in the hospitality and event planning industries. They each have successful track records and together have the right combination of attributes necessary to deliver an awesome yet unique dining experience. Brand Strength: Culinary Fight Night® has cultivated an exclusive and recognizable brand identity due to our 3 years of operation. Our Public Relation partners, publicists and graphic designers have the experience, eye for detail and reputation that will allow Culinary Fight Night® to expand into other markets including television and continue to cultivate our philanthropic mission while building strategic alliances nationwide then globally.

Looking forward to you being a part of our next Culinary Fight Night® experience. “WHERE COOKING & COMPETITION COLLIDE!”