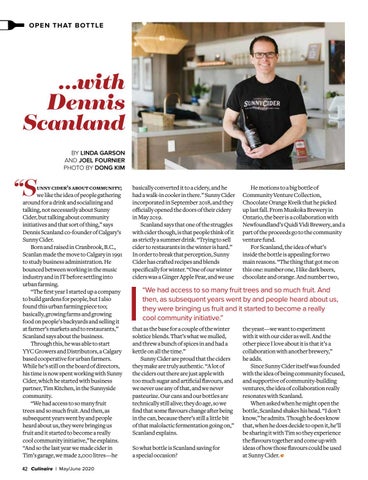 BY LINDA GARSON AND JOEL FOURNIER PHOTO BY DONG KIM

unny cider’s about community; we like the idea of people gathering around for a drink and socializing and talking, not necessarily about Sunny Cider, but talking about community initiatives and that sort of thing,” says Dennis Scanland co-founder of Calgary’s Sunny Cider. Born and raised in Cranbrook, B.C., Scanlan made the move to Calgary in 1991 to study business administration. He bounced between working in the music industry and in IT before settling into urban farming. “The first year I started up a company to build gardens for people, but I also found this urban farming piece too; basically, growing farms and growing food on people’s backyards and selling it at farmer’s markets and to restaurants,” Scanland says about the business. Through this, he was able to start YYC Growers and Distributors, a Calgary based cooperative for urban farmers. While he’s still on the board of directors, his time is now spent working with Sunny Cider, which he started with business partner, Tim Kitchen, in the Sunnyside community. “We had access to so many fruit trees and so much fruit. And then, as subsequent years went by and people heard about us, they were bringing us fruit and it started to become a really cool community initiative,” he explains. “And so the last year we made cider in Tim’s garage, we made 2,000 litres—he

basically converted it to a cidery, and he had a walk-in cooler in there.” Sunny Cider incorporated in September 2018, and they officially opened the doors of their cidery in May 2019. Scanland says that one of the struggles with cider though, is that people think of it as strictly a summer drink. “Trying to sell cider to restaurants in the winter is hard.” In order to break that perception, Sunny Cider has crafted recipes and blends specifically for winter. “One of our winter ciders was a Ginger Apple Pear, and we use

He motions to a big bottle of Community Venture Collection, Chocolate Orange Kveik that he picked up last fall. From Muskoka Brewery in Ontario, the beer is a collaboration with Newfoundland’s Quidi Vidi Brewery, and a part of the proceeds go to the community venture fund. For Scanland, the idea of what’s inside the bottle is appealing for two main reasons. “The thing that got me on this one: number one, I like dark beers, chocolate and orange. And number two,

“We had access to so many fruit trees and so much fruit. And then, as subsequent years went by and people heard about us, they were bringing us fruit and it started to become a really cool community initiative.” that as the base for a couple of the winter solstice blends. That’s what we mulled, and threw a bunch of spices in and had a kettle on all the time.” Sunny Cider are proud that the ciders they make are truly authentic. “A lot of the ciders out there are just apple with too much sugar and artificial flavours, and we never use any of that, and we never pasteurize. Our cans and our bottles are technically still alive; they do age, so we find that some flavours change after being in the can, because there’s still a little bit of that malolactic fermentation going on,” Scanland explains. So what bottle is Scanland saving for a special occasion?

the yeast—we want to experiment with it with our cider as well. And the other piece I love about it is that it’s a collaboration with another brewery,” he adds. Since Sunny Cider itself was founded with the idea of being community focused, and supportive of community-building ventures, the idea of collaboration really resonates with Scanland. When asked when he might open the bottle, Scanland shakes his head. “I don’t know,” he admits. Though he does know that, when he does decide to open it, he’ll be sharing it with Tim so they experience the flavours together and come up with ideas of how those flavours could be used at Sunny Cider.