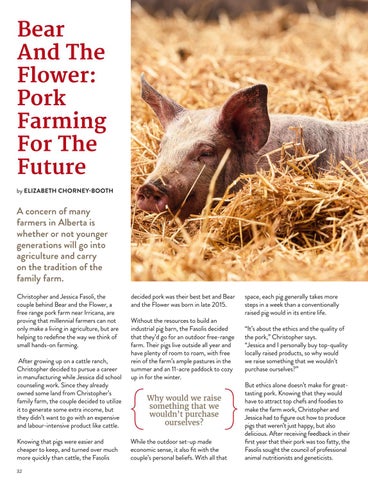 Bear And The Flower: Pork Farming For The Future by ELIZABETH CHORNEY-BOOTH

A concern of many farmers in Alberta is whether or not younger generations will go into agriculture and carry on the tradition of the family farm. Christopher and Jessica Fasoli, the couple behind Bear and the Flower, a free range pork farm near Irricana, are proving that millennial farmers can not only make a living in agriculture, but are helping to redefine the way we think of small hands-on farming. After growing up on a cattle ranch, Christopher decided to pursue a career in manufacturing while Jessica did school counseling work. Since they already owned some land from Christopher’s family farm, the couple decided to utilize it to generate some extra income, but they didn’t want to go with an expensive and labour-intensive product like cattle. Knowing that pigs were easier and cheaper to keep, and turned over much more quickly than cattle, the Fasolis 32

decided pork was their best bet and Bear and the Flower was born in late 2015. Without the resources to build an industrial pig barn, the Fasolis decided that they’d go for an outdoor free-range farm. Their pigs live outside all year and have plenty of room to roam, with free rein of the farm’s ample pastures in the summer and an 11-acre paddock to cozy up in for the winter.

Why would we raise something that we wouldn’t purchase ourselves? While the outdoor set-up made economic sense, it also fit with the couple’s personal beliefs. With all that

space, each pig generally takes more steps in a week than a conventionally raised pig would in its entire life. “It’s about the ethics and the quality of the pork,” Christopher says. “Jessica and I personally buy top-quality locally raised products, so why would we raise something that we wouldn’t purchase ourselves?” But ethics alone doesn’t make for greattasting pork. Knowing that they would have to attract top chefs and foodies to make the farm work, Christopher and Jessica had to figure out how to produce pigs that weren’t just happy, but also delicious. After receiving feedback in their first year that their pork was too fatty, the Fasolis sought the council of professional animal nutritionists and geneticists.

Alberta's freshest food and beverage magazine. Dining out, dining in, wine, beer, spirits, and cocktails. This issue features our food and d...

Alberta's freshest food and beverage magazine. Dining out, dining in, wine, beer, spirits, and cocktails. This issue features our food and d...