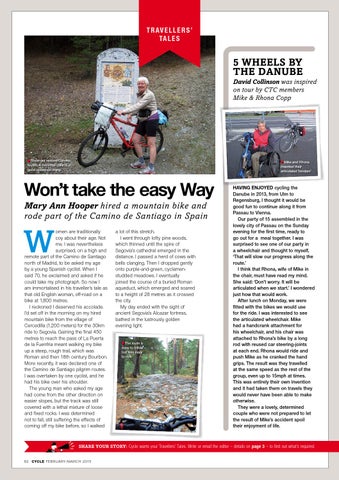 There are various Camino routes. A mountain bike is a good option on many

omen are traditionally coy about their age. Not me. I was nevertheless surprised, on a high and remote part of the Camino de Santiago north of Madrid, to be asked my age by a young Spanish cyclist. When I said 70, he exclaimed and asked if he could take my photograph. So now I am immortalised in his traveller’s tale as that old English woman, off-road on a bike at 1,800 metres. I reckoned I deserved his accolade. I’d set off in the morning on my hired mountain bike from the village of Cercedilla (1,200 meters) for the 30km ride to Segovia. Gaining the final 450 metres to reach the pass of La Puerta de la Fuenfria meant walking my bike up a steep, rough trail, which was Roman and then 18th century Bourbon. More recently, it was declared one of the Camino de Santiago pilgrim routes. I was overtaken by one cyclist, and he had his bike over his shoulder. The young man who asked my age had come from the other direction on easier slopes, but the track was still covered with a lethal mixture of loose and fixed rocks. I was determined not to fall, still suffering the effects of coming off my bike before, so I walked

a lot of this stretch. I went through lofty pine woods, which thinned until the spire of Segovia’s cathedral emerged in the distance. I passed a herd of cows with bells clanging. Then I dropped gently onto purple-and-green, cyclamenstudded meadows. I eventually joined the course of a buried Roman aqueduct, which emerged and soared to a height of 28 metres as it crossed the city. My day ended with the sight of ancient Segovia’s Alcazar fortress, bathed in the lustrously golden evening light.

The route is easy to follow but less easy to ride

HAVING ENJOYED cycling the Danube in 2013, from Ulm to Regensburg, I thought it would be good fun to continue along it from Passau to Vienna. Our party of 15 assembled in the lovely city of Passau on the Sunday evening for the first time, ready to go out for a meal together. I was surprised to see one of our party in a wheelchair and thought to myself, ‘That will slow our progress along the route.’ I think that Rhona, wife of Mike in the chair, must have read my mind. She said: ‘Don’t worry. It will be articulated when we start.’ I wondered just how that would work. After lunch on Monday, we were fitted with the bikes we would use for the ride. I was interested to see the articulated wheelchair. Mike had a handcrank attachment for his wheelchair, and his chair was attached to Rhona’s bike by a long rod with reused car steering-joints at each end. Rhona would ride and push Mike as he cranked the hand grips. The result was they travelled at the same speed as the rest of the group, even up to 15mph at times. This was entirely their own invention and it had taken them on travels they would never have been able to make otherwise. They were a lovely, determined couple who were not prepared to let the result of Mike’s accident spoil their enjoyment of life. 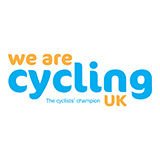