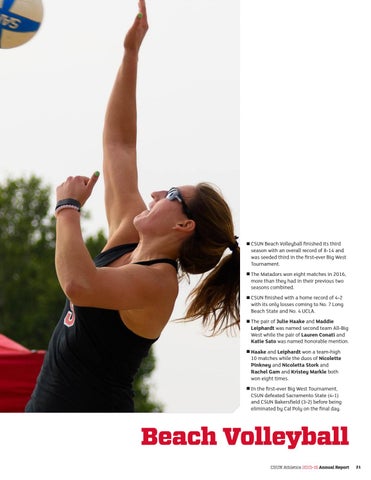 season with an overall record of 8-14 and was seeded third in the first-ever Big West Tournament.

more than they had in their previous two seasons combined.

n CSUN finished with a home record of 4-2

with its only losses coming to No. 7 Long Beach State and No. 4 UCLA.

n The pair of Julie Haake and Maddie

Leiphardt was named second team All-Big West while the pair of Lauren Conati and Katie Sato was named honorable mention.

10 matches while the duos of Nicolette Pinkney and Nicoletta Stork and Rachel Gam and Kristey Markle both won eight times.

CSUN defeated Sacramento State (4-1) and CSUN Bakersfield (3-2) before being eliminated by Cal Poly on the final day.