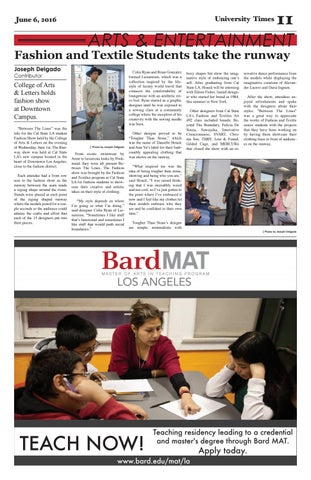 Colin Ryan and Brian Gonzalez formed Leisureism, which was a collection inspired by the lifestyle of luxury world travel that connects the comfortability of loungewear with an aesthetic retro feel. Ryan started as a graphic designer until he was exposed to a sewing class at a community college where the inception of his creativity with the sewing needle was born.

College of Arts & Letters holds fashion show at Downtown Campus. “Between The Lines” was the title for the Cal State LA student Fashion Show held by the College of Arts & Letters on the evening of Wednesday, June 1st. The Runway show was held at Cal State LA’s new campus located in the heart of Downtown Los Angeles, close to the fashion district. Each attendee had a front row seat to the fashion show as the runway between the seats made a zigzag shape around the room. Stands were placed at each point of the zigzag shaped runway where the models posed for a couple seconds so the audience could admire the crafts and effort that each of the 15 designers put into their pieces.

From exotic swimwear by Arete to luxurious looks by Poshmind, they were all present Between The Lines. The Fashion show was brought by the Fashion and Textiles program at Cal State LA for fashion students to showcase their creative and artistic takes on their style of clothing. “My style depends on where I’m going or what I’m doing,” said designer Colin Ryan of Leisureism. “Sometimes I like stuff that’s functional and sometimes I like stuff that would push social boundaries.”

Other designs proved to be “Tougher Than Stone,” which was the name of Danielle Houck and Ann Yu’s label for their fashionably appealing clothing that was shown on the runway. “What inspired me was the idea of being tougher than stone, showing and being who you are,” said Houck. “I was raised thinking that I was incredibly weird and not cool, so I’ve just gotten to the point where I’ve embraced it now and I feel like my clothes let their models embrace who they are and be confident in their own skin.” Tougher Than Stone’s designs are simple, minimalistic with

boxy shapes but show the imaginative style of embracing one’s self. After graduating from Cal State LA, Houck will be interning with Eileen Fisher, famed designer who started her brand in 1984, this summer in New York. Other designers from Cal State LA’s Fashion and Textiles Art 492 class included brands: Beyond The Boundary, Felicia De Souza, Sawayaka, Innovative Consciousness, SVART, Chroma Sen, THRY, Lost & Found, Gilded Cage, and MERCURii that closed the show with an in-

novative dance performance from the models while displaying the imaginative creations of Alexander Lucero and Daria Ingram. After the show, attendees enjoyed refreshments and spoke with the designers about their styles. "Between The Lines" was a great way to appreciate the works of Fashion and Textile senior students with the projects that they have been working on by having them showcase their clothing lines in front of audiences on the runway. 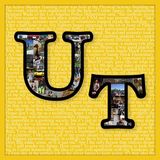