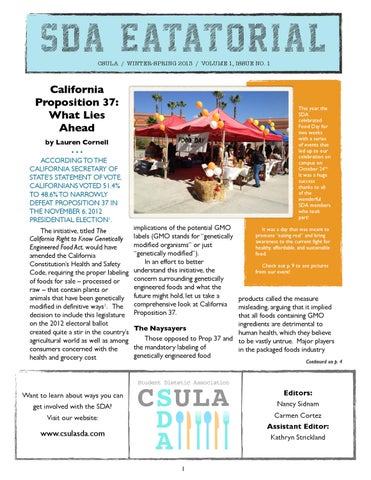 California Proposition 37: What Lies Ahead by Lauren Cornell ••• ACCORDING TO THE CALIFORNIA SECRETARY OF STATE’S STATEMENT OF VOTE, CALIFORNIANS VOTED 51.4% TO 48.6% TO NARROWLY DEFEAT PROPOSITION 37 IN THE NOVEMBER 6, 2012 PRESIDENTIAL ELECTION1. The initiative, titled The California Right to Know Genetically Engineered Food Act, would have amended the California Constitution’s Health and Safety Code, requiring the proper labeling of foods for sale – processed or raw – that contain plants or animals that have been genetically modified in definitive ways1. The decision to include this legislature on the 2012 electoral ballot created quite a stir in the country’s agricultural world as well as among consumers concerned with the health and grocery cost

This year, the SDA celebrated Food Day for two weeks with a series of events that led up to our celebration on campus on October 24th. It was a huge success thanks to all of the wonderful SDA members who took part!

implications of the potential GMO It was a day that was meant to promote “eating real” and bring labels (GMO stands for “genetically awareness to the current fight for modified organisms” or just healthy, affordable, and sustainable “genetically modified”). food. In an effort to better Check out p. 9 to see pictures understand this initiative, the from our event! concern surrounding genetically engineered foods and what the future might hold, let us take a products called the measure comprehensive look at California misleading, arguing that it implied Proposition 37. that all foods containing GMO ingredients are detrimental to The Naysayers human health, which they believe Those opposed to Prop 37 and to be vastly untrue. Major players the mandatory labeling of in the packaged foods industry genetically engineered food

Want to learn about ways you can get involved with the SDA?