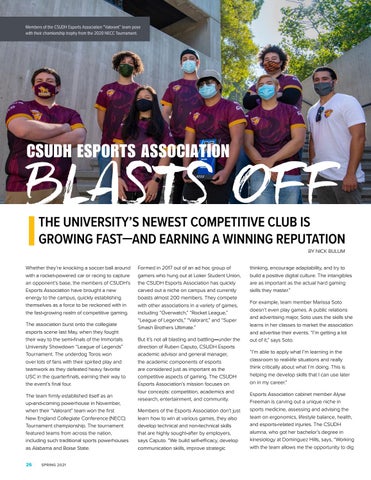 Members of the CSUDH Esports Association “Valorant” team pose with their chamionship trophy from the 2020 NECC Tournament.

Whether they’re knocking a soccer ball around with a rocket-powered car or racing to capture an opponent’s base, the members of CSUDH’s Esports Association have brought a new energy to the campus, quickly establishing themselves as a force to be reckoned with in the fast-growing realm of competitive gaming. The association burst onto the collegiate esports scene last May, when they fought their way to the semi-finals of the Immortals University Showdown “League of Legends” Tournament. The underdog Toros won over lots of fans with their spirited play and teamwork as they defeated heavy favorite USC in the quarterfinals, earning their way to the event’s final four. The team firmly established itself as an up-and-coming powerhouse in November, when their “Valorant” team won the first New England Collegiate Conference (NECC) Tournament championship. The tournament featured teams from across the nation, including such traditional sports powerhouses as Alabama and Boise State. 26

Formed in 2017 out of an ad hoc group of gamers who hung out at Loker Student Union, the CSUDH Esports Association has quickly carved out a niche on campus and currently boasts almost 200 members. They compete with other associations in a variety of games, including “Overwatch,” “Rocket League,” “League of Legends,” “Valorant,” and “Super Smash Brothers Ultimate.” But it’s not all blasting and battling—under the direction of Ruben Caputo, CSUDH Esports academic advisor and general manager, the academic components of esports are considered just as important as the competitive aspects of gaming. The CSUDH Esports Association’s mission focuses on four concepts: competition, academics and research, entertainment, and community. Members of the Esports Association don’t just learn how to win at various games, they also develop technical and non-technical skills that are highly sought-after by employers, says Caputo. “We build self-efficacy, develop communication skills, improve strategic

thinking, encourage adaptability, and try to build a positive digital culture. The intangibles are as important as the actual hard gaming skills they master.” For example, team member Marissa Soto doesn’t even play games. A public relations and advertising major, Soto uses the skills she learns in her classes to market the association and advertise their events. “I’m getting a lot out of it,” says Soto. “I’m able to apply what I’m learning in the classroom to real-life situations and really think critically about what I’m doing. This is helping me develop skills that I can use later on in my career.” Esports Association cabinet member Alyse Freeman is carving out a unique niche in sports medicine, assessing and advising the team on ergonomics, lifestyle balance, health, and esports-related injuries. The CSUDH alumna, who got her bachelor’s degree in kinesiology at Dominguez Hills, says, “Working with the team allows me the opportunity to dig 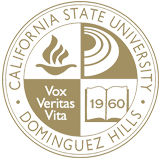