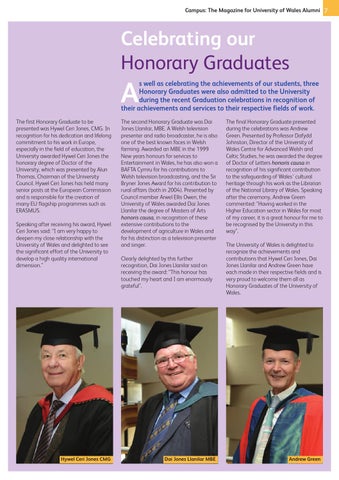 Campus: The Magazine for University of Wales Alumni

The second Honorary Graduate was Dai Jones Llanilar, MBE. A Welsh television presenter and radio broadcaster, he is also one of the best known faces in Welsh farming. Awarded an MBE in the 1999 New years honours for services to Entertainment in Wales, he has also won a BAFTA Cymru for his contributions to Welsh television broadcasting, and the Sir Bryner Jones Award for his contribution to rural affairs (both in 2004). Presented by Council member Arwel Ellis Owen, the University of Wales awarded Dai Jones Llanilar the degree of Masters of Arts honoris causa, in recognition of these extensive contributions to the development of agriculture in Wales and for his distinction as a television presenter and singer. Clearly delighted by this further recognition, Dai Jones Llanilar said on receiving the award: “This honour has touched my heart and I am enormously grateful”.

The final Honorary Graduate presented during the celebrations was Andrew Green. Presented by Professor Dafydd Johnston, Director of the University of Wales Centre for Advanced Welsh and Celtic Studies, he was awarded the degree of Doctor of Letters honoris causa in recognition of his significant contribution to the safeguarding of Wales’ cultural heritage through his work as the Librarian of the National Library of Wales. Speaking after the ceremony, Andrew Green commented: “Having worked in the Higher Education sector in Wales for most of my career, it is a great honour for me to be recognised by the University in this way”. The University of Wales is delighted to recognize the achievements and contributions that Hywel Ceri Jones, Dai Jones Llanilar and Andrew Green have each made in their respective fields and is very proud to welcome them all as Honorary Graduates of the University of Wales.