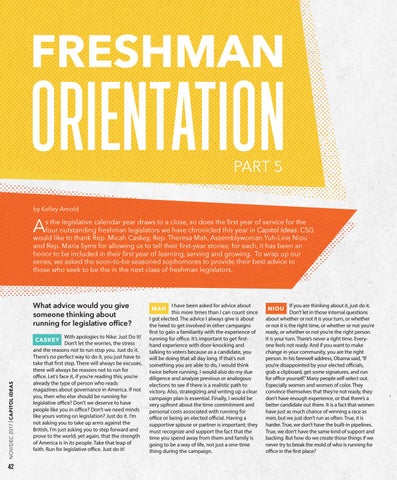 s the legislative calendar year draws to a close, so does the first year of service for the four outstanding freshman legislators we have chronicled this year in Capitol Ideas. CSG would like to thank Rep. Micah Caskey, Rep. Theresa Mah, Assemblywoman Yuh-Line Niou and Rep. Maria Syms for allowing us to tell their first-year stories; for each, it has been an honor to be included in their first year of learning, serving and growing. To wrap up our series, we asked the soon-to-be seasoned sophomores to provide their best advice to those who seek to be the in the next class of freshman legislators.

What advice would you give someone thinking about running for legislative office? With apologies to Nike: Just Do It! Don’t let the worries, the stress and the reasons not to run stop you. Just do it. There’s no perfect way to do it, you just have to take that first step. There will always be excuses, there will always be reasons not to run for office. Let’s face it, if you’re reading this, you’re already the type of person who reads magazines about governance in America. If not you, then who else should be running for legislative office? Don’t we deserve to have people like you in office? Don’t we need minds like yours voting on legislation? Just do it. I’m not asking you to take up arms against the British, I’m just asking you to step forward and prove to the world, yet again, that the strength of America is in its people. Take that leap of faith. Run for legislative office. Just do it!

I have been asked for advice about this more times than I can count since I got elected. The advice I always give is about the need to get involved in other campaigns first to gain a familiarity with the experience of running for office. It’s important to get firsthand experience with door-knocking and talking to voters because as a candidate, you will be doing that all day long. If that’s not something you are able to do, I would think twice before running. I would also do my due diligence and analyze previous or analogous elections to see if there is a realistic path to victory. Also, strategizing and writing up a clear campaign plan is essential. Finally, I would be very upfront about the time commitment and personal costs associated with running for office or being an elected official. Having a supportive spouse or partner is important; they must recognize and support the fact that the time you spend away from them and family is going to be a way of life, not just a one-time thing during the campaign. MAH

If you are thinking about it, just do it. Don’t let in those internal questions about whether or not it is your turn, or whether or not it is the right time, or whether or not you’re ready, or whether or not you’re the right person. It is your turn. There’s never a right time. Everyone feels not ready. And if you want to make change in your community, you are the right person. In his farewell address, Obama said, “If you’re disappointed by your elected officials, grab a clipboard, get some signatures, and run for office yourself.” Many people self-select out. Especially women and women of color. They convince themselves that they’re not ready, they don’t have enough experience, or that there’s a better candidate out there. It is a fact that women have just as much chance of winning a race as men, but we just don’t run as often. True, it is harder. True, we don’t have the built-in pipelines. True, we don’t have the same kind of support and backing. But how do we create those things if we never try to break the mold of who is running for office in the first place? NIOU 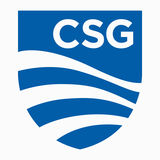 The Council of State Governments