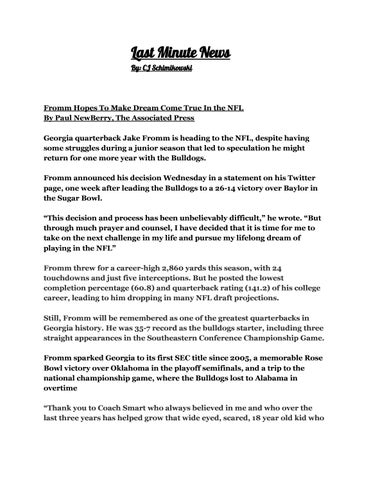 Fromm Hopes To Make Dream Come True In the NFL By Paul NewBerry, The Associated Press Georgia quarterback Jake Fromm is heading to the NFL, despite having some struggles during a junior season that led to speculation he might return for one more year with the Bulldogs. Fromm announced his decision Wednesday in a statement on his Twitter page, one week after leading the Bulldogs to a 26-14 victory over Baylor in the Sugar Bowl. “This decision and process has been unbelievably difficult,” he wrote. “But through much prayer and counsel, I have decided that it is time for me to take on the next challenge in my life and pursue my lifelong dream of playing in the NFL” Fromm threw for a career-high 2,860 yards this season, with 24 touchdowns and just five interceptions. But he posted the lowest completion percentage (60.8) and quarterback rating (141.2) of his college career, leading to him dropping in many NFL draft projections. Still, Fromm will be remembered as one of the greatest quarterbacks in Georgia history. He was 35-7 record as the bulldogs starter, including three straight appearances in the Southeastern Conference Championship Game. Fromm sparked Georgia to its first SEC title​ since 2005, ​a memorable Rose Bowl victory​ over Oklahoma in the playoff semifinals, and a trip to the national championship game, where ​the Bulldogs lost to Alabama​ in overtime “Thank you to Coach Smart who always believed in me and who over the last three years has helped grow that wide eyed, scared, 18 year old kid who

got handed the ball in South Bend, into a better man, and secondly a better football player,” Fromm said.

Sleeping With Sirens Comes Back With A Wail By: Cj Schimikowski In late September 2019, Sleeping With Sirens came out with their 6th studio album titled “How It Feels To Be Lost”. With a different sound coming from the band, “How it Feels To Be Lost” is more of a rock album than their previous pop albums such as “Gossip” and “Madness”. The album goes into tackling trauma head on with songs like “Leave it All Behind” and “Blood Lines”. Blood Lines goes into talking about family problems as a young child and trying to keep from turning into his parents but realizes that its not possible to prevent that. “Are we bound to lose? Maybe we just don't get to choose. Is it in our DNA? Was I just born this way?” It goes on to say whatever they accomplish in his life will be more than they ever did and becoming a better person than they every were. ​Comeback single Leave It All Behind – up there with the best songs Sleeping With Sirens have ever written – is the sound of a band reinvigorated, embracing a heavier direction while retaining the knack for a monster chorus. ​In “Leave It All Behind” they talk about dropping everything right here and now and leaving to go on to take his own life, but questions his decision on how people will remember him and think about him if he does make this decision. The song is based off of depression and anxiety. The song is based on him wondering what the world would be like if he took his own life, and how people will remember him after. In the song he states “you are not alone”, meaning he is there to serve as a companion or supporter. The singer is speaking from experience, as he suffered from anxiety and depression while working on their fifth studio album, “Gossip”. They are using this album to talk about mental health diseases and illnesses and trying to tell the audience that they are not alone and that they have people to go to and talk to about their problems. ​Agree To Disagree is another impressive single, and it also happens to be home to some of the most delightful lyrics penned this year, as frontman Kellin Quinn forcefully explains

how ‘​You can keep the sun ‘cause I like the night time better’​ . Despite the odd misstep, though, with less albums sold than their other hits, How It Feels To Be Lost still feels like a win. Sleeping With Sirens have produced some of their finest work to date here, and the overall result is a welcome return to form from a band who, not so long ago, appeared to have lost their way.

Our Last Night – Overcome The Darkness By: Damon Taylor Hot on the heels of this year’s ‘Let Light Overcome’, post-hardcore quartet Our Last Night are following it up just a few months later with its companion record, ‘Overcome The Darkness’. A bold move for any group, risking quantity over quality, the sixth record in their catalogue sees the group grow into their more experimental tendencies. Opening with liquid keyboard chords and trap inspired beats, ‘When Humans Become Our Gods’ showcases the croon of Trevor Wentworth. Relying on a strong vocal hook and leaning into contemporary pop, the addition of Matt Wentworth‘s guitar leads gives the track a dystopian feel. Peppered with bursts of jagged guitars and building strings, the song works around its simple premise to ensure that it doesn’t outstay its welcome. Taking cues from industrial and pop in equal measure, ‘Losing Sleep’ plays with its dynamics to create an unexpected twist amidst its catchy chorus. Jumping into bouncing riffs and restrained muted keys with conviction, the track straddles between experimentation and streamlined pop-rock with impressive results. Whilst the structures of the cuts on offer here may be simple, Our Last Night are at their strongest when working around a solid hook. As shown with ‘Outnumbered’, marking the midway point of the record, the track builds around a pulsing synth and an evolving vocal hook. Boasting a stop start-chorus and a cinematic guitar lead, it keeps adding and removing techniques to its foundations to keep interest. Arguably the most dynamic song on the record, ‘Hysteria’ runs through ambient verses, jagged pre-choruses, and soaring codas with ease. Showcasing the strongest elements of the group in less than four minutes, it moves past the group’s songwriting ability and reveals the technical proficiency of each member. Bridging the gap between the two records, ‘Let Light Overcome The Darkness’ is a lyrically driven track and, thanks to Trevor Wentworth‘s delivery, the track serves as a

message of hope for its listeners. Minimal but effective, it not only conveys the message of the two records, but also acts as a palate cleanser for ‘The Beaten Path’. Whilst ‘Overcome The Darkness’ may not break barriers within their soundscape, Our Last Night have created a record that holds up to their catalogue as well as rounding off the ideas approached on its preceding sister LP, ‘Let Light Overcome’.

Cash Bail Reform Eliminations ​At the beginning on the new decade when the ball drops, on January 1, 2020 at 12:00 AM, the Cash Bail Reform Eliminations will go into effect, eliminating pretrial detention and cash bail to an estimated 90 percent of arrests. For the remaining cases, the judges will maintain the option of setting cash bail. As of January 1, a defendant must be released from custody without bail for crimes such as Second Degree Manslaughter, Aggravated Vehicular Homicide, Making Terroristic Threats, and a whole lot more. Now it is up to the defendant to return to the courthouse, but without the bail in order, nothing is stopping them from fleeing and or going out and doing more harm to the community and citizens. With this going into effect, it puts a lot more risk onto the public and a lot more stress onto the law enforcement agencies and personnel. It will increase the amount of defendants who flee and dont go back for their trial. One of the arrests this cash bail reform elimination includes DWAI, which is driving while ability impaired. Which includes taking prescription pills, it is an arrest when you have a blood alcohol content of under .04. With this new cash bail reform going into effect at the ball drop of the new decade, it will impact many peoples lives in more ways than one. If the suspect flees, the victims family will be distraught and upset that the person that hurt their family member is gone, and if he’s smart enough will not return. If a citizen calls 9-1-1 to report a crime, the defendant now has the oppurtunity to get all of your information, your name, phone number, address, and will be allowed to return to the scene of the crime. This will make the public fear calling 9-1-1, especially for domestic violence calls and assaults. All in all, this is going to be a very experimental year for this new reform. It could be very hurtful or help. We will all see within the next months and the new decade.

Cash Bail Reform Rebuttal At the beginning of this new decade, a new bail reform will be going into effect. The Cash Bail Reform allows certain criminals to be released from custody after the have been arrested. As of now, people who have previously been tried and are awaiting trial will have their cases reviewed and set free under the judges determination and under the new reform. New York City is offering prizes to the defendants to bribe them to come back to court, with gifts such like New York Yankees Tickets, free CDTA Bus Passes, and VISA Gift Cards, because who wouldn't want someone who was arrested for Manslaughter at a packed New York Yankees game. This is a great reform, especially for the government. Because criminals can vote and now that they are free because of Governer Cuomo, he will get the majority vote just from the criminals, so that is great news for anyone that enjoys him as Governor of New York State. One of the good things to come from this Bail Reform is if anyone is falsely accused and imprisoned wrongly. Now we all know that this Cash Bail Reform will not, and should not last too long, but while it is in effect we should be grateful that we are giving these criminals a second chance to succeed in their life that they have already messed up terribly. While everyone else is being a law abiding citizen, we will be walking along with these criminals, because we let that happen and we will see the consequences for that. Its only a matter of time.

The team juggles a mini ball to prepare before the game

Jacob Scott scores the first goal of the game 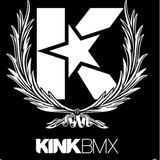