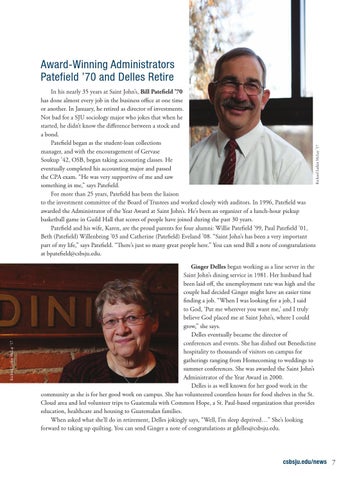 In his nearly 35 years at Saint John’s, Bill Patefield ’70 has done almost every job in the business office at one time or another. In January, he retired as director of investments. Not bad for a SJU sociology major who jokes that when he started, he didn’t know the difference between a stock and a bond. Patefield began as the student-loan collections manager, and with the encouragement of Gervase Soukup ’42, OSB, began taking accounting classes. He eventually completed his accounting major and passed the CPA exam. “He was very supportive of me and saw something in me,” says Patefield. For more than 25 years, Patefield has been the liaison to the investment committee of the Board of Trustees and worked closely with auditors. In 1996, Patefield was awarded the Administrator of the Year Award at Saint John’s. He’s been an organizer of a lunch-hour pickup basketball game in Guild Hall that scores of people have joined during the past 30 years. Patefield and his wife, Karen, are the proud parents for four alumni: Willie Patefield ’99, Paul Patefield ’01, Beth (Patefield) Willenbring ’03 and Catherine (Patefield) Eveland ’08. “Saint John’s has been a very important part of my life,” says Patefield. “There’s just so many great people here.” You can send Bill a note of congratulations at bpatefield@csbsju.edu.

Ginger Delles began working as a line server in the Saint John’s dining service in 1981. Her husband had been laid off, the unemployment rate was high and the couple had decided Ginger might have an easier time finding a job. “When I was looking for a job, I said to God, ‘Put me wherever you want me,’ and I truly believe God placed me at Saint John’s, where I could grow,” she says. Delles eventually became the director of conferences and events. She has dished out Benedictine hospitality to thousands of visitors on campus for gatherings ranging from Homecoming to weddings to summer conferences. She was awarded the Saint John’s Administrator of the Year Award in 2000. Delles is as well known for her good work in the community as she is for her good work on campus. She has volunteered countless hours for food shelves in the St. Cloud area and led volunteer trips to Guatemala with Common Hope, a St. Paul-based organization that provides education, healthcare and housing to Guatemalan families. When asked what she’ll do in retirement, Delles jokingly says, “Well, I’m sleep deprived…” She’s looking forward to taking up quilting. You can send Ginger a note of congratulations at gdelles@csbsju.edu.