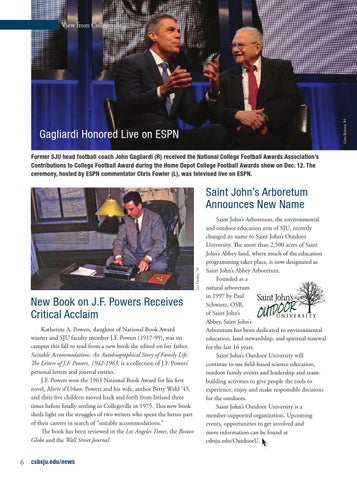 New Book on J.F. Powers Receives Critical Acclaim Katherine A. Powers, daughter of National Book Award winner and SJU faculty member J.F. Powers (1917-99), was on campus this fall to read from a new book she edited on her father. Suitable Accommodations: An Autobiographical Story of Family Life: The Letters of J.F. Powers, 1942-1963, is a collection of J.F. Powers’ personal letters and journal entries. J.F. Powers won the 1963 National Book Award for his first novel, Morte d’Urban. Powers and his wife, author Betty Wahl ’45, and their five children moved back and forth from Ireland three times before finally settling in Collegeville in 1975. This new book sheds light on the struggles of two writers who spent the better part of their careers in search of “suitable accommodations.” The book has been reviewed in the Los Angeles Times, the Boston Globe and the Wall Street Journal.