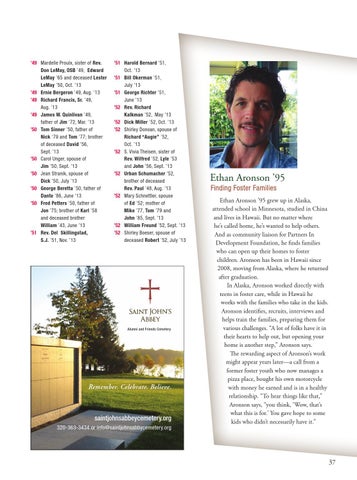 Ethan Aronson ’95 grew up in Alaska, attended school in Minnesota, studied in China and lives in Hawaii. But no matter where he’s called home, he’s wanted to help others. And as community liaison for Partners In Development Foundation, he finds families who can open up their homes to foster children. Aronson has been in Hawaii since 2008, moving from Alaska, where he returned after graduation. In Alaska, Aronson worked directly with teens in foster care, while in Hawaii he works with the families who take in the kids. Aronson identifies, recruits, interviews and helps train the families, preparing them for various challenges. “A lot of folks have it in their hearts to help out, but opening your home is another step,” Aronson says. The rewarding aspect of Aronson’s work might appear years later—a call from a former foster youth who now manages a pizza place, bought his own motorcycle with money he earned and is in a healthy relationship. “To hear things like that,” Aronson says, “you think, ‘Wow, that’s what this is for.’ You gave hope to some kids who didn’t necessarily have it.”