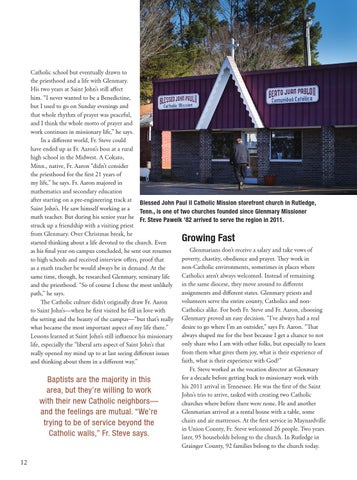 Catholic school but eventually drawn to the priesthood and a life with Glenmary. His two years at Saint John’s still affect him. “I never wanted to be a Benedictine, but I used to go on Sunday evenings and that whole rhythm of prayer was peaceful, and I think the whole motto of prayer and work continues in missionary life,” he says. In a different world, Fr. Steve could have ended up as Fr. Aaron’s boss at a rural high school in the Midwest. A Cokato, Minn., native, Fr. Aaron “didn’t consider the priesthood for the first 21 years of my life,” he says. Fr. Aaron majored in mathematics and secondary education after starting on a pre-engineering track at Blessed John Paul II Catholic Mission storefront church in Rutledge, Saint John’s. He saw himself working as a Tenn., is one of two churches founded since Glenmary Missioner math teacher. But during his senior year he Fr. Steve Pawelk ’82 arrived to serve the region in 2011. struck up a friendship with a visiting priest from Glenmary. Over Christmas break, he started thinking about a life devoted to the church. Even Glenmarians don’t receive a salary and take vows of as his final year on campus concluded, he sent out resumes poverty, chastity, obedience and prayer. They work in to high schools and received interview offers, proof that non-Catholic environments, sometimes in places where as a math teacher he would always be in demand. At the Catholics aren’t always welcomed. Instead of remaining same time, though, he researched Glenmary, seminary life and the priesthood. “So of course I chose the most unlikely in the same diocese, they move around to different assignments and different states. Glenmary priests and path,” he says. volunteers serve the entire county, Catholics and non The Catholic culture didn’t originally draw Fr. Aaron Catholics alike. For both Fr. Steve and Fr. Aaron, choosing to Saint John’s—when he first visited he fell in love with the setting and the beauty of the campus—“but that’s really Glenmary proved an easy decision. “I’ve always had a real desire to go where I’m an outsider,” says Fr. Aaron. “That what became the most important aspect of my life there.” Lessons learned at Saint John’s still influence his missionary always shaped me for the best because I get a chance to not only share who I am with other folks, but especially to learn life, especially the “liberal arts aspect of Saint John’s that from them what gives them joy, what is their experience of really opened my mind up to at last seeing different issues faith, what is their experience with God?” and thinking about them in a different way.” Fr. Steve worked as the vocation director at Glenmary for a decade before getting back to missionary work with Baptists are the majority in this his 2011 arrival in Tennessee. He was the first of the Saint area, but they’re willing to work John’s trio to arrive, tasked with creating two Catholic with their new Catholic neighbors— churches where before there were none. He and another Glenmarian arrived at a rental house with a table, some and the feelings are mutual. “We’re chairs and air mattresses. At the first service in Maynardville trying to be of service beyond the in Union County, Fr. Steve welcomed 26 people. Two years Catholic walls,” Fr. Steve says. later, 95 households belong to the church. In Rutledge in Grainger County, 92 families belong to the church today.