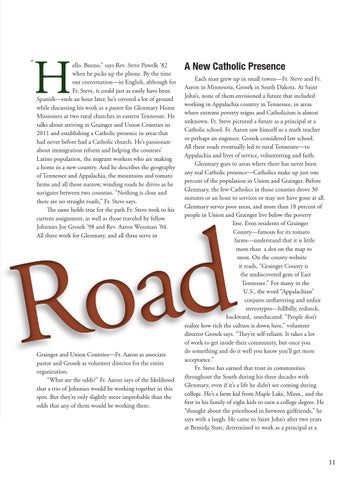 ello. Bueno,” says Rev. Steve Pawelk ’82 when he picks up the phone. By the time our conversation—in English, although for Fr. Steve, it could just as easily have been Spanish—ends an hour later, he’s covered a lot of ground while discussing his work as a pastor for Glenmary Home Missioners at two rural churches in eastern Tennessee. He talks about arriving in Grainger and Union Counties in 2011 and establishing a Catholic presence in areas that had never before had a Catholic church. He’s passionate about immigration reform and helping the counties’ Latino population, the migrant workers who are making a home in a new country. And he describes the geography of Tennessee and Appalachia, the mountains and tomato farms and all those narrow, winding roads he drives as he navigates between two counties. “Nothing is close and there are no straight roads,” Fr. Steve says. The same holds true for the path Fr. Steve took to his current assignment, as well as those traveled by fellow Johnnies Joe Grosek ’98 and Rev. Aaron Wessman ’04. All three work for Glenmary, and all three serve in

A New Catholic Presence Each man grew up in small towns—Fr. Steve and Fr. Aaron in Minnesota, Grosek in South Dakota. At Saint John’s, none of them envisioned a future that included working in Appalachia country in Tennessee, in areas where extreme poverty reigns and Catholicism is almost unknown. Fr. Steve pictured a future as a principal at a Catholic school. Fr. Aaron saw himself as a math teacher or perhaps an engineer. Grosek considered law school. All these roads eventually led to rural Tennessee—to Appalachia and lives of service, volunteering and faith. Glenmary goes to areas where there has never been any real Catholic presence—Catholics make up just one percent of the population in Union and Grainger. Before Glenmary, the few Catholics in those counties drove 30 minutes or an hour to services or may not have gone at all. Glenmary serves poor areas, and more than 18 percent of people in Union and Grainger live below the poverty line. Even residents of Grainger County—famous for its tomato farms—understand that it is little more than a dot on the map to most. On the county website it reads, “Grainger County is the undiscovered gem of East Tennessee.” For many in the U.S., the word “Appalachian” conjures unflattering and unfair stereotypes—hillbilly, redneck, backward, uneducated. “People don’t realize how rich the culture is down here,” volunteer director Grosek says. “They’re self-reliant. It takes a lot of work to get inside their community, but once you do something and do it well you know you’ll get more acceptance.” Fr. Steve has earned that trust in communities throughout the South during his three decades with Glenmary, even if it’s a life he didn’t see coming during college. He’s a farm kid from Maple Lake, Minn., and the first in his family of eight kids to earn a college degree. He “thought about the priesthood in between girlfriends,” he says with a laugh. He came to Saint John’s after two years at Bemidji State, determined to work as a principal at a

d a o R Grainger and Union Counties—Fr. Aaron as associate pastor and Grosek as volunteer director for the entire organization. “What are the odds?” Fr. Aaron says of the likelihood that a trio of Johnnies would be working together in this spot. But they’re only slightly more improbable than the odds that any of them would be working there.