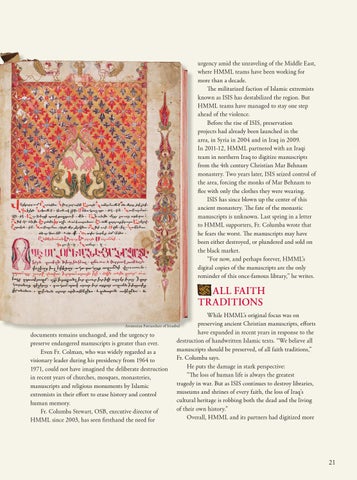 urgency amid the unraveling of the Middle East, where HMML teams have been working for more than a decade. The militarized faction of Islamic extremists known as ISIS has destabilized the region. But HMML teams have managed to stay one step ahead of the violence. Before the rise of ISIS, preservation projects had already been launched in the area, in Syria in 2004 and in Iraq in 2009. In 2011-12, HMML partnered with an Iraqi team in northern Iraq to digitize manuscripts from the 4th century Christian Mar Behnam monastery. Two years later, ISIS seized control of the area, forcing the monks of Mar Behnam to flee with only the clothes they were wearing. ISIS has since blown up the center of this ancient monastery. The fate of the monastic manuscripts is unknown. Last spring in a letter to HMML supporters, Fr. Columba wrote that he fears the worst. The manuscripts may have been either destroyed, or plundered and sold on the black market. “For now, and perhaps forever, HMML’s digital copies of the manuscripts are the only reminder of this once-famous library,” he writes.

ALL FAITH TRADITIONS While HMML’s original focus was on preserving ancient Christian manuscripts, efforts Aremenian Patriarchate of Istanbul have expanded in recent years in response to the documents remains unchanged, and the urgency to destruction of handwritten Islamic texts. “We believe all preserve endangered manuscripts is greater than ever. manuscripts should be preserved, of all faith traditions,” Even Fr. Colman, who was widely regarded as a Fr. Columba says. visionary leader during his presidency from 1964 to 1971, could not have imagined the deliberate destruction He puts the damage in stark perspective: “The loss of human life is always the greatest in recent years of churches, mosques, monasteries, tragedy in war. But as ISIS continues to destroy libraries, manuscripts and religious monuments by Islamic museums and shrines of every faith, the loss of Iraq’s extremists in their effort to erase history and control cultural heritage is robbing both the dead and the living human memory. of their own history.” Fr. Columba Stewart, OSB, executive director of Overall, HMML and its partners had digitized more HMML since 2003, has seen firsthand the need for