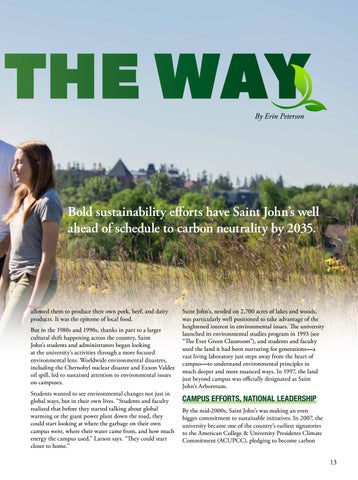 THE WAY By Erin Peterson

Bold sustainability efforts have Saint John’s well ahead of schedule to carbon neutrality by 2035.

allowed them to produce their own pork, beef, and dairy products. It was the epitome of local food. But in the 1980s and 1990s, thanks in part to a larger cultural shift happening across the country, Saint John’s students and administrators began looking at the university’s activities through a more focused environmental lens. Worldwide environmental disasters, including the Chernobyl nuclear disaster and Exxon Valdez oil spill, led to sustained attention to environmental issues on campuses. Students wanted to see environmental changes not just in global ways, but in their own lives. “Students and faculty realized that before they started talking about global warming or the giant power plant down the road, they could start looking at where the garbage on their own campus went, where their water came from, and how much energy the campus used,” Larson says. “They could start closer to home.”

Saint John’s, nestled on 2,700 acres of lakes and woods, was particularly well positioned to take advantage of the heightened interest in environmental issues. The university launched its environmental studies program in 1993 (see “The Ever Green Classroom”), and students and faculty used the land it had been nurturing for generations—a vast living laboratory just steps away from the heart of campus—to understand environmental principles in much deeper and more nuanced ways. In 1997, the land just beyond campus was officially designated as Saint John’s Arboretum.

CAMPUS EFFORTS, NATIONAL LEADERSHIP By the mid-2000s, Saint John’s was making an even bigger commitment to sustainable initiatives. In 2007, the university became one of the country’s earliest signatories to the American College &amp; University Presidents Climate Commitment (ACUPCC), pledging to become carbon