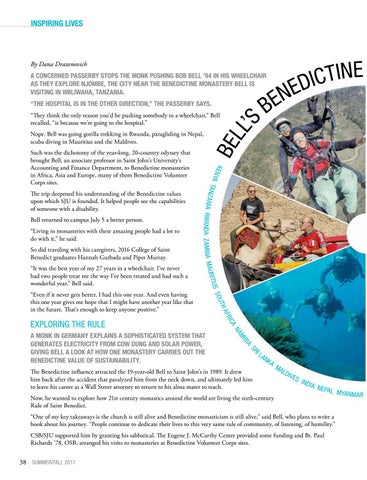 A CONCERNED PASSERBY STOPS THE MONK PUSHING BOB BELL ’94 IN HIS WHEELCHAIR AS THEY EXPLORE NJOMBE, THE CITY NEAR THE BENEDICTINE MONASTERY BELL IS VISITING IN IMILIWAHA, TANZANIA. “THE HOSPITAL IS IN THE OTHER DIRECTION,” THE PASSERBY SAYS.

Nope. Bell was going gorilla trekking in Rwanda, paragliding in Nepal, scuba diving in Mauritius and the Maldives.

Bell returned to campus July 5 a better person. “Living in monasteries with these amazing people had a lot to do with it,” he said. So did traveling with his caregivers, 2016 College of Saint Benedict graduates Hannah Gurbada and Piper Murray.

A MONK IN GERMANY EXPLAINS A SOPHISTICATED SYSTEM THAT GENERATES ELECTRICITY FROM COW DUNG AND SOLAR POWER, GIVING BELL A LOOK AT HOW ONE MONASTERY CARRIES OUT THE BENEDICTINE VALUE OF SUSTAINABILITY.

“Even if it never gets better, I had this one year. And even having this one year gives me hope that I might have another year like that in the future. That’s enough to keep anyone positive.”

“It was the best year of my 27 years in a wheelchair. I’ve never had two people treat me the way I’ve been treated and had such a wonderful year,” Bell said.

The trip deepened his understanding of the Benedictine values upon which SJU is founded. It helped people see the capabilities of someone with a disability.

Such was the dichotomy of the year-long, 20-country odyssey that brought Bell, an associate professor in Saint John’s University’s Accounting and Finance Department, to Benedictine monasteries in Africa, Asia and Europe, many of them Benedictine Volunteer Corps sites.

“They think the only reason you’d be pushing somebody in a wheelchair,” Bell recalled, “is because we’re going to the hospital.”

The Benedictine influence attracted the 19-year-old Bell to Saint John’s in 1989. It drew him back after the accident that paralyzed him from the neck down, and ultimately led him to leave his career as a Wall Street attorney to return to his alma mater to teach. Now, he wanted to explore how 21st century monastics around the world are living the sixth-century Rule of Saint Benedict.

“One of my key takeaways is the church is still alive and Benedictine monasticism is still alive,” said Bell, who plans to write a book about his journey. “People continue to dedicate their lives to this very same rule of community, of listening, of humility.” CSB/SJU supported him by granting his sabbatical. The Eugene J. McCarthy Center provided some funding and Br. Paul Richards ’78, OSB, arranged his visits to monasteries at Benedictine Volunteer Corps sites.