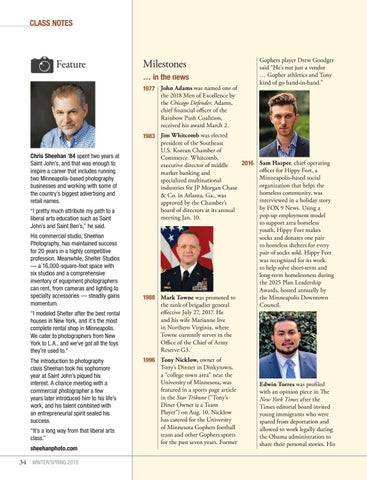 Milestones … in the news 1977 John Adams was named one of the 2018 Men of Excellence by the Chicago Defender. Adams, chief financial officer of the Rainbow Push Coalition, received his award March 2.

Chris Sheehan ’84 spent two years at Saint John’s, and that was enough to inspire a career that includes running two Minneapolis-based photography businesses and working with some of the country’s biggest advertising and retail names. “I pretty much attribute my path to a liberal arts education such as Saint John’s and Saint Ben’s,” he said. His commercial studio, Sheehan Photography, has maintained success for 20 years in a highly competitive profession. Meanwhile, Shelter Studios — a 16,000-square-foot space with six studios and a comprehensive inventory of equipment photographers can rent, from cameras and lighting to specialty accessories — steadily gains momentum. &quot;I modeled Shelter after the best rental houses in New York, and it&#39;s the most complete rental shop in Minneapolis. We cater to photographers from New York to L.A., and we’ve got all the toys they’re used to.&quot; The introduction to photography class Sheehan took his sophomore year at Saint John’s piqued his interest. A chance meeting with a commercial photographer a few years later introduced him to his life’s work, and his talent combined with an entrepreneurial spirit sealed his success. “It’s a long way from that liberal arts class.” sheehanphoto.com

1983 Jim Whitcomb was elected president of the Southeast U.S. Korean Chamber of Commerce. Whitcomb, 2016 Sam Harper, chief operating executive director of middle officer for Hippy Feet, a market banking and Minneapolis-based social specialized multinational organization that helps the industries for JP Morgan Chase homeless community, was &amp; Co. in Atlanta, Ga., was interviewed in a holiday story approved by the Chamber’s by FOX 9 News. Using a board of directors at its annual pop-up employment model meeting Jan. 10. to support area homeless youth, Hippy Feet makes socks and donates one pair to homeless shelters for every pair of socks sold. Hippy Feet was recognized for its work to help solve short-term and long-term homelessness during the 2025 Plan Leadership Awards, hosted annually by 1988 Mark Towne was promoted to the Minneapolis Downtown the rank of brigadier general Council. effective July 27, 2017. He and his wife Marianne live in Northern Virginia, where Towne currently serves in the Office of the Chief of Army Reserve G3. 1996 Tony Nicklow, owner of Tony’s Dinner in Dinkytown, a “college town area” near the University of Minnesota, was featured in a sports page article in the Star Tribune (“Tony’s Diner Owner is a Team Player”) on Aug. 10. Nicklow has catered for the University of Minnesota Gophers football team and other Gophers sports for the past seven years. Former

Edwin Torres was profiled with an opinion piece in The New York Times after the Times editorial board invited young immigrants who were spared from deportation and allowed to work legally during the Obama administration to share their personal stories. His