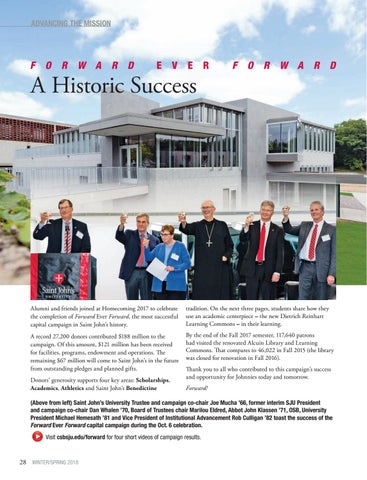 Alumni and friends joined at Homecoming 2017 to celebrate the completion of Forward Ever Forward, the most successful capital campaign in Saint John’s history.

tradition. On the next three pages, students share how they use an academic centerpiece – the new Dietrich Reinhart Learning Commons – in their learning.

A record 27,200 donors contributed $188 million to the campaign. Of this amount, $121 million has been received for facilities, programs, endowment and operations. The remaining $67 million will come to Saint John’s in the future from outstanding pledges and planned gifts.

Thank you to all who contributed to this campaign’s success and opportunity for Johnnies today and tomorrow. Forward!