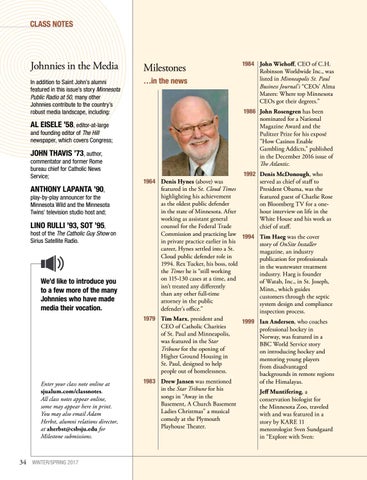 In addition to Saint John’s alumni featured in this issue’s story Minnesota Public Radio at 50, many other Johnnies contribute to the country’s robust media landscape, including:

host of the The Catholic Guy Show on Sirius Satellite Radio.

We’d like to introduce you to a few more of the many Johnnies who have made media their vocation.

1964 Denis Hynes (above) was featured in the St. Cloud Times highlighting his achievement as the oldest public defender in the state of Minnesota. After working as assistant general counsel for the Federal Trade Commission and practicing law in private practice earlier in his career, Hynes settled into a St. Cloud public defender role in 1994. Rex Tucker, his boss, told the Times he is “still working on 115-130 cases at a time, and isn’t treated any differently than any other full-time attorney in the public defender’s office.” 1979 Tim Marx, president and CEO of Catholic Charities of St. Paul and Minneapolis, was featured in the Star Tribune for the opening of Higher Ground Housing in St. Paul, designed to help people out of homelessness.

Enter your class note online at sjualum.com/classnotes. All class notes appear online, some may appear here in print. You may also email Adam Herbst, alumni relations director, at aherbst@csbsju.edu for Milestone submissions.

Drew Jansen was mentioned in the Star Tribune for his songs in “Away in the Basement, A Church Basement Ladies Christmas” a musical comedy at the Plymouth Playhouse Theater.

John Rosengren has been nominated for a National Magazine Award and the Pulitzer Prize for his exposé &quot;How Casinos Enable Gambling Addicts,&quot; published in the December 2016 issue of The Atlantic.

Denis McDonough, who served as chief of staff to President Obama, was the featured guest of Charlie Rose on Bloomberg TV for a one- hour interview on life in the White House and his work as chief of staff.

Tim Haeg was the cover story of OnSite Installer magazine, an industry publication for professionals in the wastewater treatment industry. Haeg is founder of Watab, Inc., in St. Joseph, Minn., which guides customers through the septic system design and compliance inspection process.

Ian Andersen, who coaches professional hockey in Norway, was featured in a BBC World Service story on introducing hockey and mentoring young players from disadvantaged backgrounds in remote regions of the Himalayas.

Jeff Muntifering, a conservation biologist for the Minnesota Zoo, traveled with and was featured in a story by KARE 11 meteorologist Sven Sundgaard in “Explore with Sven: