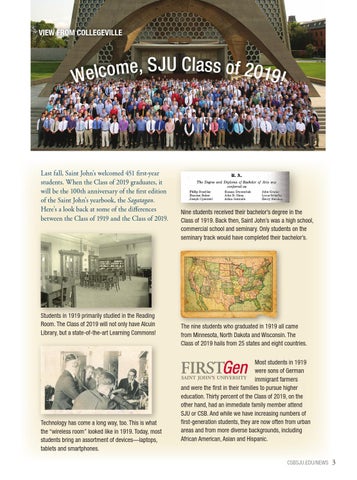 Students in 1919 primarily studied in the Reading Room. The Class of 2019 will not only have Alcuin Library, but a state-of-the-art Learning Commons!

Technology has come a long way, too. This is what the “wireless room” looked like in 1919. Today, most students bring an assortment of devices—laptops, tablets and smartphones.

The nine students who graduated in 1919 all came from Minnesota, North Dakota and Wisconsin. The Class of 2019 hails from 25 states and eight countries. Most students in 1919 were sons of German immigrant farmers and were the first in their families to pursue higher education. Thirty percent of the Class of 2019, on the other hand, had an immediate family member attend SJU or CSB. And while we have increasing numbers of first-generation students, they are now often from urban areas and from more diverse backgrounds, including African American, Asian and Hispanic.