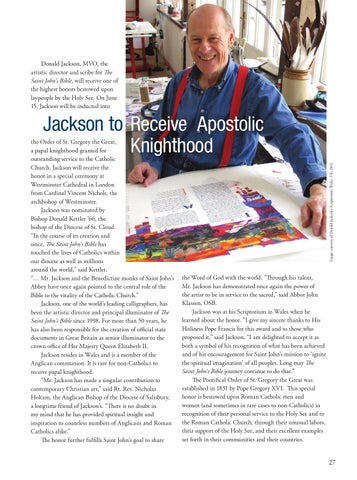 Donald Jackson, MVO, the artistic director and scribe for The Saint John’s Bible, will receive one of the highest honors bestowed upon laypeople by the Holy See. On June 15, Jackson will be inducted into

the Order of St. Gregory the Great, a papal knighthood granted for outstanding service to the Catholic Church. Jackson will receive the honor in a special ceremony at Westminster Cathedral in London from Cardinal Vincent Nichols, the archbishop of Westminster. Jackson was nominated by Bishop Donald Kettler ’66, the bishop of the Diocese of St. Cloud. “In the course of its creation and since, The Saint John’s Bible has touched the lives of Catholics within our diocese as well as millions around the world,” said Kettler. “… Mr. Jackson and the Benedictine monks of Saint John’s Abbey have once again pointed to the central role of the Bible to the vitality of the Catholic Church.” Jackson, one of the world’s leading calligraphers, has been the artistic director and principal illuminator of The Saint John’s Bible since 1998. For more than 50 years, he has also been responsible for the creation of official state documents in Great Britain as senior illuminator to the crown office of Her Majesty Queen Elizabeth II. Jackson resides in Wales and is a member of the Anglican communion. It is rare for non-Catholics to receive papal knighthood. “Mr. Jackson has made a singular contribution to contemporary Christian art,” said Rt. Rev. Nicholas Holtam, the Anglican Bishop of the Diocese of Salisbury, a longtime friend of Jackson’s. “There is no doubt in my mind that he has provided spiritual insight and inspiration to countless numbers of Anglicans and Roman Catholics alike.” The honor further fulfills Saint John’s goal to share

the Word of God with the world. “Through his talent, Mr. Jackson has demonstrated once again the power of the artist to be in service to the sacred,” said Abbot John Klassen, OSB. Jackson was at his Scriptorium in Wales when he learned about the honor. “I give my sincere thanks to His Holiness Pope Francis for this award and to those who proposed it,” said Jackson. “I am delighted to accept it as both a symbol of his recognition of what has been achieved and of his encouragement for Saint John&#39;s mission to ‘ignite the spiritual imagination’ of all peoples. Long may The Saint John&#39;s Bible journey continue to do that.” The Pontifical Order of St. Gregory the Great was established in 1831 by Pope Gregory XVI. This special honor is bestowed upon Roman Catholic men and women (and sometimes in rare cases to non-Catholics) in recognition of their personal service to the Holy See and to the Roman Catholic Church, through their unusual labors, their support of the Holy See, and their excellent examples set forth in their communities and their countries.