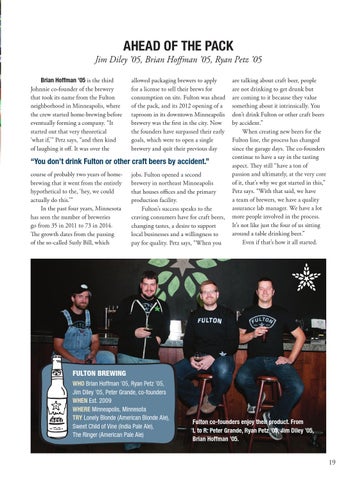 AHEAD OF THE PACK Jim Diley ’05, Brian Hoffman ’05, Ryan Petz ’05 Brian Hoffman ’05 is the third Johnnie co-founder of the brewery that took its name from the Fulton neighborhood in Minneapolis, where the crew started home-brewing before eventually forming a company. “It started out that very theoretical ‘what if,’” Petz says, “and then kind of laughing it off. It was over the

allowed packaging brewers to apply for a license to sell their brews for consumption on site. Fulton was ahead of the pack, and its 2012 opening of a taproom in its downtown Minneapolis brewery was the first in the city. Now the founders have surpassed their early goals, which were to open a single brewery and quit their previous day

“You don’t drink Fulton or other craft beers by accident.” course of probably two years of homebrewing that it went from the entirely hypothetical to the, ‘hey, we could actually do this.’” In the past four years, Minnesota has seen the number of breweries go from 35 in 2011 to 73 in 2014. The growth dates from the passing of the so-called Surly Bill, which

jobs. Fulton opened a second brewery in northeast Minneapolis that houses offices and the primary production facility. Fulton’s success speaks to the craving consumers have for craft beers, changing tastes, a desire to support local businesses and a willingness to pay for quality. Petz says, “When you

are talking about craft beer, people are not drinking to get drunk but are coming to it because they value something about it intrinsically. You don’t drink Fulton or other craft beers by accident.” When creating new beers for the Fulton line, the process has changed since the garage days. The co-founders continue to have a say in the tasting aspect. They still “have a ton of passion and ultimately, at the very core of it, that’s why we got started in this,” Petz says. “With that said, we have a team of brewers, we have a quality assurance lab manager. We have a lot more people involved in the process. It’s not like just the four of us sitting around a table drinking beer.” Even if that’s how it all started.