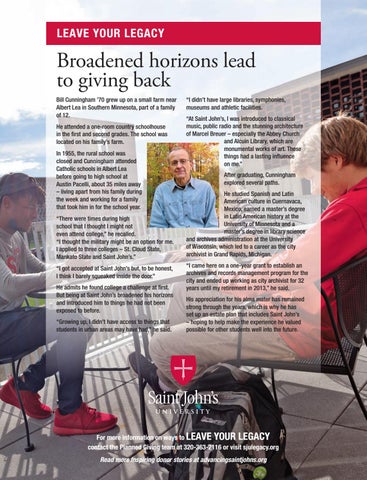 Broadened horizons lead to giving back Bill Cunningham ’70 grew up on a small farm near Albert Lea in Southern Minnesota, part of a family of 12. He attended a one-room country schoolhouse in the first and second grades. The school was located on his family’s farm. In 1955, the rural school was closed and Cunningham attended Catholic schools in Albert Lea before going to high school at Austin Pacelli, about 35 miles away – living apart from his family during the week and working for a family that took him in for the school year. “There were times during high school that I thought I might not even attend college,” he recalled. “I thought the military might be an option for me. I applied to three colleges – St. Cloud State, Mankato State and Saint John’s.” “I got accepted at Saint John’s but, to be honest, I think I barely squeaked inside the door.” He admits he found college a challenge at first. But being at Saint John’s broadened his horizons and introduced him to things he had not been exposed to before. “Growing up, I didn’t have access to things that students in urban areas may have had,” he said.

“I didn’t have large libraries, symphonies, museums and athletic facilities. “At Saint John’s, I was introduced to classical music, public radio and the stunning architecture of Marcel Breuer – especially the Abbey Church and Alcuin Library, which are monumental works of art. These things had a lasting influence on me.” After graduating, Cunningham explored several paths. He studied Spanish and Latin American culture in Cuernavaca, Mexico, earned a master’s degree in Latin American history at the University of Minnesota and a master’s degree in library science and archives administration at the University of Wisconsin, which led to a career as the city archivist in Grand Rapids, Michigan. “I came here on a one-year grant to establish an archives and records management program for the city and ended up working as city archivist for 32 years until my retirement in 2013,” he said. His appreciation for his alma mater has remained strong through the years, which is why he has set up an estate plan that includes Saint John’s – hoping to help make the experience he valued possible for other students well into the future.

For more information on ways to LEAVE YOUR LEGACY contact the Planned Giving team at 320-363-2116 or visit sjulegacy.org Read more inspiring donor stories at advancingsaintjohns.org