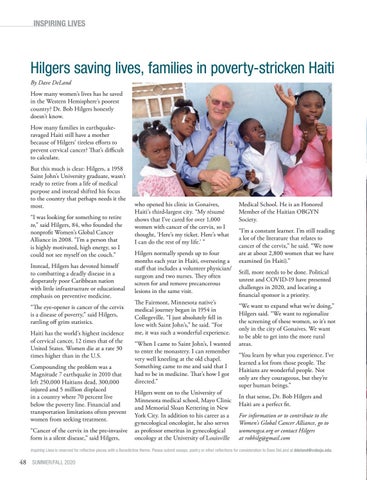 Hilgers saving lives, families in poverty-stricken Haiti By Dave DeLand How many women’s lives has he saved in the Western Hemisphere’s poorest country? Dr. Bob Hilgers honestly doesn’t know. How many families in earthquakeravaged Haiti still have a mother because of Hilgers’ tireless efforts to prevent cervical cancer? That’s difficult to calculate. But this much is clear: Hilgers, a 1958 Saint John’s University graduate, wasn’t ready to retire from a life of medical purpose and instead shifted his focus to the country that perhaps needs it the most. “I was looking for something to retire to,” said Hilgers, 84, who founded the nonprofit Women’s Global Cancer Alliance in 2008. “I’m a person that is highly motivated, high energy, so I could not see myself on the couch.” Instead, Hilgers has devoted himself to combatting a deadly disease in a desperately poor Caribbean nation with little infrastructure or educational emphasis on preventive medicine. “The eye-opener is cancer of the cervix is a disease of poverty,” said Hilgers, rattling off grim statistics. Haiti has the world’s highest incidence of cervical cancer, 12 times that of the United States. Women die at a rate 30 times higher than in the U.S. Compounding the problem was a Magnitude 7 earthquake in 2010 that left 250,000 Haitians dead, 300,000 injured and 5 million displaced in a country where 70 percent live below the poverty line. Financial and transportation limitations often prevent women from seeking treatment. “Cancer of the cervix in the pre-invasive form is a silent disease,” said Hilgers,

who opened his clinic in Gonaives, Haiti’s third-largest city. “My résumé shows that I’ve cared for over 1,000 women with cancer of the cervix, so I thought, ‘Here’s my ticket. Here’s what I can do the rest of my life.’ ” Hilgers normally spends up to four months each year in Haiti, overseeing a staff that includes a volunteer physician/ surgeon and two nurses. They often screen for and remove precancerous lesions in the same visit. The Fairmont, Minnesota native’s medical journey began in 1954 in Collegeville. “I just absolutely fell in love with Saint John’s,” he said. “For me, it was such a wonderful experience. “When I came to Saint John’s, I wanted to enter the monastery. I can remember very well kneeling at the old chapel. Something came to me and said that I had to be in medicine. That’s how I got directed.” Hilgers went on to the University of Minnesota medical school, Mayo Clinic and Memorial Sloan Kettering in New York City. In addition to his career as a gynecological oncologist, he also serves as professor emeritus in gynecological oncology at the University of Louisville

Medical School. He is an Honored Member of the Haitian OBGYN Society. “I’m a constant learner. I’m still reading a lot of the literature that relates to cancer of the cervix,” he said. “We now are at about 2,800 women that we have examined (in Haiti).” Still, more needs to be done. Political unrest and COVID-19 have presented challenges in 2020, and locating a financial sponsor is a priority. “We want to expand what we’re doing,” Hilgers said. “We want to regionalize the screening of these women, so it’s not only in the city of Gonaives. We want to be able to get into the more rural areas. “You learn by what you experience. I’ve learned a lot from those people. The Haitians are wonderful people. Not only are they courageous, but they’re super human beings.” In that sense, Dr. Bob Hilgers and Haiti are a perfect fit. For information or to contribute to the Women’s Global Cancer Alliance, go to womensgca.org or contact Hilgers at robhilg@gmail.com

Inspiring Lives is reserved for reflective pieces with a Benedictine theme. Please submit essays, poetry or other reflections for consideration to Dave DeLand at ddeland@csbsju.edu.