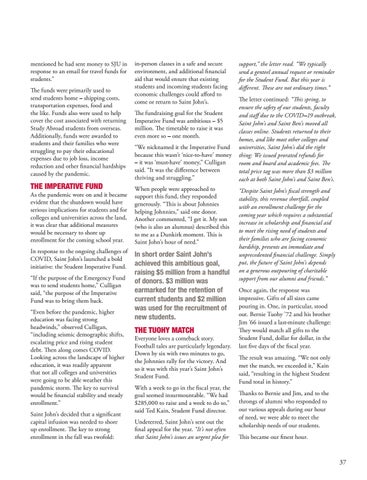 mentioned he had sent money to SJU in response to an email for travel funds for students.” The funds were primarily used to send students home – shipping costs, transportation expenses, food and the like. Funds also were used to help cover the cost associated with returning Study Abroad students from overseas. Additionally, funds were awarded to students and their families who were struggling to pay their educational expenses due to job loss, income reduction and other financial hardships caused by the pandemic.

THE IMPERATIVE FUND As the pandemic wore on and it became evident that the shutdown would have serious implications for students and for colleges and universities across the land, it was clear that additional measures would be necessary to shore up enrollment for the coming school year. In response to the ongoing challenges of COVID, Saint John’s launched a bold initiative: the Student Imperative Fund. “If the purpose of the Emergency Fund was to send students home,” Culligan said, “the purpose of the Imperative Fund was to bring them back. “Even before the pandemic, higher education was facing strong headwinds,” observed Culligan, “including seismic demographic shifts, escalating price and rising student debt. Then along comes COVID. Looking across the landscape of higher education, it was readily apparent that not all colleges and universities were going to be able weather this pandemic storm. The key to survival would be financial stability and steady enrollment.” Saint John’s decided that a significant capital infusion was needed to shore up enrollment. The key to strong enrollment in the fall was twofold:

in-person classes in a safe and secure environment, and additional financial aid that would ensure that existing students and incoming students facing economic challenges could afford to come or return to Saint John’s. The fundraising goal for the Student Imperative Fund was ambitious – $5 million. The timetable to raise it was even more so – one month. “We nicknamed it the Imperative Fund because this wasn’t ‘nice-to-have’ money – it was ‘must-have’ money,” Culligan said. “It was the difference between thriving and struggling.” When people were approached to support this fund, they responded generously. “This is about Johnnies helping Johnnies,” said one donor. Another commented, “I get it. My son (who is also an alumnus) described this to me as a Dunkirk moment. This is Saint John’s hour of need.”

In short order Saint John’s achieved this ambitious goal, raising $5 million from a handful of donors. $3 million was earmarked for the retention of current students and $2 million was used for the recruitment of new students.

THE TUOHY MATCH Everyone loves a comeback story. Football tales are particularly legendary. Down by six with two minutes to go, the Johnnies rally for the victory. And so it was with this year’s Saint John’s Student Fund. With a week to go in the fiscal year, the goal seemed insurmountable. “We had $285,000 to raise and a week to do so,” said Ted Kain, Student Fund director. Undeterred, Saint John’s sent out the final appeal for the year. “It’s not often that Saint John’s issues an urgent plea for

support,” the letter read. “We typically send a genteel annual request or reminder for the Student Fund. But this year is different. These are not ordinary times.” The letter continued: “This spring, to ensure the safety of our students, faculty and staff due to the COVID–19 outbreak, Saint John’s and Saint Ben’s moved all classes online. Students returned to their homes, and like most other colleges and universities, Saint John’s did the right thing: We issued prorated refunds for room and board and academic fees. The total price tag was more than $3 million each at both Saint John’s and Saint Ben’s. “Despite Saint John’s fiscal strength and stability, this revenue shortfall, coupled with an enrollment challenge for the coming year which requires a substantial increase in scholarship and financial aid to meet the rising need of students and their families who are facing economic hardship, presents an immediate and unprecedented financial challenge. Simply put, the future of Saint John’s depends on a generous outpouring of charitable support from our alumni and friends.” Once again, the response was impressive. Gifts of all sizes came pouring in. One, in particular, stood out. Bernie Tuohy ’72 and his brother Jim ’66 issued a last-minute challenge: They would match all gifts to the Student Fund, dollar for dollar, in the last five days of the fiscal year. The result was amazing. “We not only met the match, we exceeded it,” Kain said, “resulting in the highest Student Fund total in history.” Thanks to Bernie and Jim, and to the throngs of alumni who responded to our various appeals during our hour of need, we were able to meet the scholarship needs of our students. This became our finest hour.