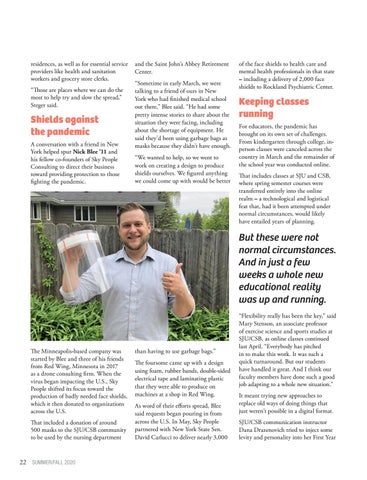 residences, as well as for essential service providers like health and sanitation workers and grocery store clerks. “Those are places where we can do the most to help try and slow the spread,” Steger said.

Shields against the pandemic A conversation with a friend in New York helped spur Nick Blee ’11 and his fellow co-founders of Sky People Consulting to direct their business toward providing protection to those fighting the pandemic.

and the Saint John’s Abbey Retirement Center. “Sometime in early March, we were talking to a friend of ours in New York who had finished medical school out there,” Blee said. “He had some pretty intense stories to share about the situation they were facing, including about the shortage of equipment. He said they’d been using garbage bags as masks because they didn’t have enough. “We wanted to help, so we went to work on creating a design to produce shields ourselves. We figured anything we could come up with would be better

Keeping classes running For educators, the pandemic has brought on its own set of challenges. From kindergarten through college, inperson classes were canceled across the country in March and the remainder of the school year was conducted online. That includes classes at SJU and CSB, where spring semester courses were transferred entirely into the online realm – a technological and logistical feat that, had it been attempted under normal circumstances, would likely have entailed years of planning.

But these were not normal circumstances. And in just a few weeks a whole new educational reality was up and running.

The Minneapolis-based company was started by Blee and three of his friends from Red Wing, Minnesota in 2017 as a drone consulting firm. When the virus began impacting the U.S., Sky People shifted its focus toward the production of badly needed face shields, which it then donated to organizations across the U.S. That included a donation of around 500 masks to the SJU/CSB community to be used by the nursing department

than having to use garbage bags.” The foursome came up with a design using foam, rubber bands, double-sided electrical tape and laminating plastic that they were able to produce on machines at a shop in Red Wing. As word of their efforts spread, Blee said requests began pouring in from across the U.S. In May, Sky People partnered with New York State Sen. David Carlucci to deliver nearly 3,000

“Flexibility really has been the key,” said Mary Stenson, an associate professor of exercise science and sports studies at SJU/CSB, as online classes continued last April. “Everybody has pitched in to make this work. It was such a quick turnaround. But our students have handled it great. And I think our faculty members have done such a good job adapting to a whole new situation.” It meant trying new approaches to replace old ways of doing things that just weren’t possible in a digital format. SJU/CSB communication instructor Dana Drazenovich tried to inject some levity and personality into her First Year