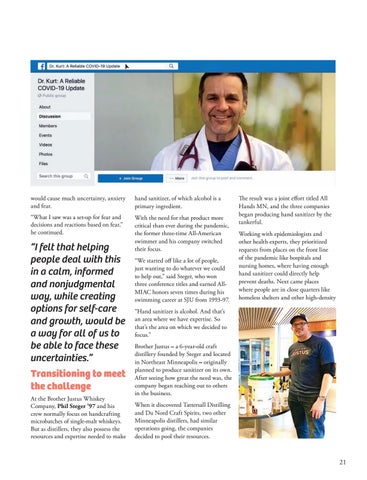 would cause much uncertainty, anxiety and fear.

hand sanitizer, of which alcohol is a primary ingredient.

“What I saw was a set-up for fear and decisions and reactions based on fear,” he continued.

With the need for that product more critical than ever during the pandemic, the former three-time All-American swimmer and his company switched their focus.

“I felt that helping people deal with this in a calm, informed and nonjudgmental way, while creating options for self-care and growth, would be a way for all of us to be able to face these uncertainties.” Transitioning to meet the challenge At the Brother Justus Whiskey Company, Phil Steger ’97 and his crew normally focus on handcrafting microbatches of single-malt whiskeys. But as distillers, they also possess the resources and expertise needed to make

“We started off like a lot of people, just wanting to do whatever we could to help out,” said Steger, who won three conference titles and earned AllMIAC honors seven times during his swimming career at SJU from 1993-97.

The result was a joint effort titled All Hands MN, and the three companies began producing hand sanitizer by the tankerful. Working with epidemiologists and other health experts, they prioritized requests from places on the front line of the pandemic like hospitals and nursing homes, where having enough hand sanitizer could directly help prevent deaths. Next came places where people are in close quarters like homeless shelters and other high-density

“Hand sanitizer is alcohol. And that’s an area where we have expertise. So that’s the area on which we decided to focus.” Brother Justus – a 6-year-old craft distillery founded by Steger and located in Northeast Minneapolis – originally planned to produce sanitizer on its own. After seeing how great the need was, the company began reaching out to others in the business. When it discovered Tattersall Distilling and Du Nord Craft Spirits, two other Minneapolis distillers, had similar operations going, the companies decided to pool their resources.