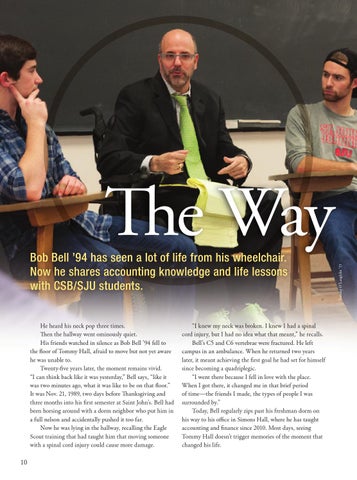 Bob Bell ’94 has seen a lot of life from his wheelchair. Now he shares accounting knowledge and life lessons with CSB/SJU students. He heard his neck pop three times. Then the hallway went ominously quiet. His friends watched in silence as Bob Bell ’94 fell to the floor of Tommy Hall, afraid to move but not yet aware he was unable to. Twenty-five years later, the moment remains vivid. “I can think back like it was yesterday,” Bell says, “like it was two minutes ago, what it was like to be on that floor.” It was Nov. 21, 1989, two days before Thanksgiving and three months into his first semester at Saint John’s. Bell had been horsing around with a dorm neighbor who put him in a full nelson and accidentally pushed it too far. Now he was lying in the hallway, recalling the Eagle Scout training that had taught him that moving someone with a spinal cord injury could cause more damage.

“I knew my neck was broken. I knew I had a spinal cord injury, but I had no idea what that meant,” he recalls. Bell’s C5 and C6 vertebrae were fractured. He left campus in an ambulance. When he returned two years later, it meant achieving the first goal he had set for himself since becoming a quadriplegic. “I went there because I fell in love with the place. When I got there, it changed me in that brief period of time—the friends I made, the types of people I was surrounded by.” Today, Bell regularly zips past his freshman dorm on his way to his office in Simons Hall, where he has taught accounting and finance since 2010. Most days, seeing Tommy Hall doesn’t trigger memories of the moment that changed his life.