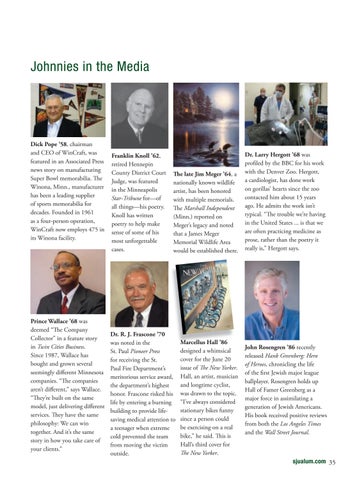 Dick Pope ’58, chairman and CEO of WinCraft, was featured in an Associated Press news story on manufacturing Super Bowl memorabilia. The Winona, Minn., manufacturer has been a leading supplier of sports memorabilia for decades. Founded in 1961 as a four-person operation, WinCraft now employs 475 in its Winona facility.

Prince Wallace ’68 was deemed “The Company Collector” in a feature story in Twin Cities Business. Since 1987, Wallace has bought and grown several seemingly different Minnesota companies. “The companies aren’t different,” says Wallace. “They’re built on the same model, just delivering different services. They have the same philosophy: We can win together. And it’s the same story in how you take care of your clients.”

Franklin Knoll ’62, retired Hennepin County District Court Judge, was featured in the Minneapolis Star-Tribune for—of all things—his poetry. Knoll has written poetry to help make sense of some of his most unforgettable cases.

The late Jim Meger ’64, a nationally known wildlife artist, has been honored with multiple memorials. The Marshall Independent (Minn.) reported on Meger’s legacy and noted that a James Meger Memorial Wildlife Area would be established there.

Dr. R. J. Frascone ’70 was noted in the St. Paul Pioneer Press for receiving the St. Paul Fire Department’s meritorious service award, the department’s highest honor. Frascone risked his life by entering a burning building to provide lifesaving medical attention to a teenager when extreme cold prevented the team from moving the victim outside.

Marcellus Hall ’86 designed a whimsical cover for the June 20 issue of The New Yorker. Hall, an artist, musician and longtime cyclist, was drawn to the topic. “I’ve always considered stationary bikes funny since a person could be exercising on a real bike,” he said. This is Hall’s third cover for The New Yorker.

Dr. Larry Hergott ’68 was profiled by the BBC for his work with the Denver Zoo. Hergott, a cardiologist, has done work on gorillas’ hearts since the zoo contacted him about 15 years ago. He admits the work isn’t typical. “The trouble we’re having in the United States ... is that we are often practicing medicine as prose, rather than the poetry it really is,” Hergott says.

John Rosengren ’86 recently released Hank Greenberg: Hero of Heroes, chronicling the life of the first Jewish major league ballplayer. Rosengren holds up Hall of Famer Greenberg as a major force in assimilating a generation of Jewish Americans. His book received positive reviews from both the Los Angeles Times and the Wall Street Journal.