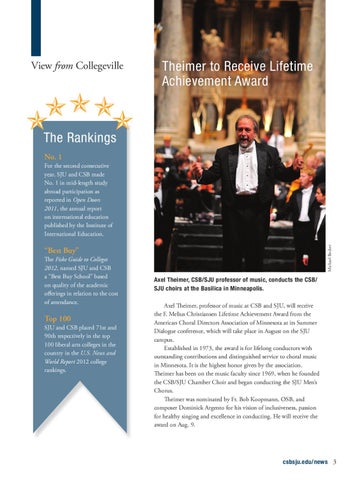 For the second consecutive year, SJU and CSB made No. 1 in mid-length study abroad participation as reported in Open Doors 2011, the annual report on international education published by the Institute of International Education.

“Best Buy” The Fiske Guide to Colleges 2012, named SJU and CSB a “Best Buy School” based on quality of the academic offerings in relation to the cost of attendance.

Top 100 SJU and CSB placed 71st and 90th respectively in the top 100 liberal arts colleges in the country in the U.S. News and World Report 2012 college rankings.

Axel Theimer, CSB/SJU professor of music, conducts the CSB/ SJU choirs at the Basilica in Minneapolis. Axel Theimer, professor of music at CSB and SJU, will receive the F. Melius Christiansen Lifetime Achievement Award from the American Choral Directors Association of Minnesota at its Summer Dialogue conference, which will take place in August on the SJU campus. Established in 1973, the award is for lifelong conductors with outstanding contributions and distinguished service to choral music in Minnesota. It is the highest honor given by the association. Theimer has been on the music faculty since 1969, when he founded the CSB/SJU Chamber Choir and began conducting the SJU Men’s Chorus. Theimer was nominated by Fr. Bob Koopmann, OSB, and composer Dominick Argento for his vision of inclusiveness, passion for healthy singing and excellence in conducting. He will receive the award on Aug. 9.