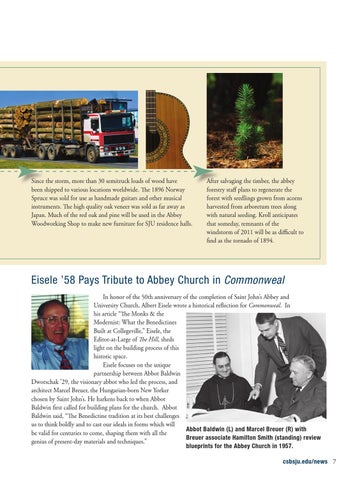 Since the storm, more than 30 semitruck loads of wood have been shipped to various locations worldwide. The 1896 Norway Spruce was sold for use as handmade guitars and other musical instruments. The high quality oak veneer was sold as far away as Japan. Much of the red oak and pine will be used in the Abbey Woodworking Shop to make new furniture for SJU residence halls.

After salvaging the timber, the abbey forestry staff plans to regenerate the forest with seedlings grown from acorns harvested from arboretum trees along with natural seeding. Kroll anticipates that someday, remnants of the windstorm of 2011 will be as difficult to find as the tornado of 1894.

Eisele ’58 Pays Tribute to Abbey Church in Commonweal In honor of the 50th anniversary of the completion of Saint John’s Abbey and University Church, Albert Eisele wrote a historical reflection for Commonweal. In his article “The Monks & the Modernist: What the Benedictines Built at Collegeville,” Eisele, the Editor-at-Large of The Hill, sheds light on the building process of this historic space. Eisele focuses on the unique partnership between Abbot Baldwin Dworschak ’29, the visionary abbot who led the process, and architect Marcel Breuer, the Hungarian-born New Yorker chosen by Saint John’s. He harkens back to when Abbot Baldwin first called for building plans for the church. Abbot Baldwin said, “The Benedictine tradition at its best challenges us to think boldly and to cast our ideals in forms which will Abbot Baldwin (L) and Marcel Breuer (R) with be valid for centuries to come, shaping them with all the Breuer associate Hamilton Smith (standing) review genius of present-day materials and techniques.” blueprints for the Abbey Church in 1957. csbsju.edu/news 7