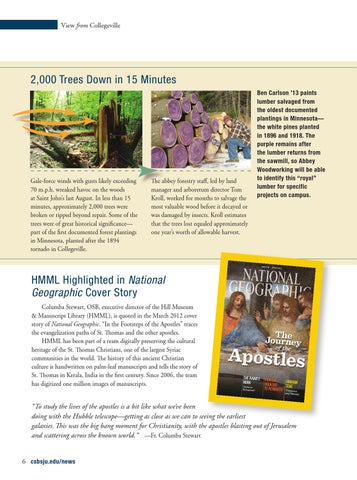 Gale-force winds with gusts likely exceeding 70 m.p.h. wreaked havoc on the woods at Saint John’s last August. In less than 15 minutes, approximately 2,000 trees were broken or ripped beyond repair. Some of the trees were of great historical significance— part of the first documented forest plantings in Minnesota, planted after the 1894 tornado in Collegeville.

The abbey forestry staff, led by land manager and arboretum director Tom Kroll, worked for months to salvage the most valuable wood before it decayed or was damaged by insects. Kroll estimates that the trees lost equaled approximately one year’s worth of allowable harvest.

Ben Carlson ’13 paints lumber salvaged from the oldest documented plantings in Minnesota— the white pines planted in 1896 and 1918. The purple remains after the lumber returns from the sawmill, so Abbey Woodworking will be able to identify this “royal” lumber for specific projects on campus.

HMML Highlighted in National Geographic Cover Story Columba Stewart, OSB, executive director of the Hill Museum & Manuscript Library (HMML), is quoted in the March 2012 cover story of National Geographic. “In the Footsteps of the Apostles” traces the evangelization paths of St. Thomas and the other apostles. HMML has been part of a team digitally preserving the cultural heritage of the St. Thomas Christians, one of the largest Syriac communities in the world. The history of this ancient Christian culture is handwritten on palm-leaf manuscripts and tells the story of St. Thomas in Kerala, India in the first century. Since 2006, the team has digitized one million images of manuscripts.

“To study the lives of the apostles is a bit like what we’ve been doing with the Hubble telescope—getting as close as we can to seeing the earliest galaxies. This was the big bang moment for Christianity, with the apostles blasting out of Jerusalem and scattering across the known world.” —Fr. Columba Stewart 6 csbsju.edu/news