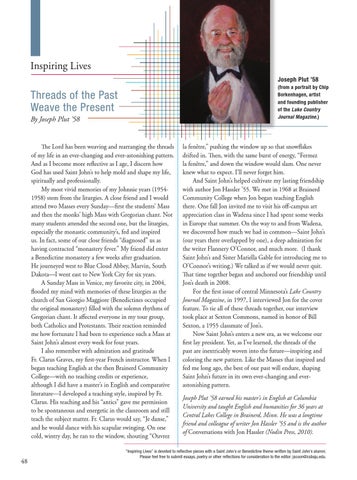 Inspiring Lives Joseph Plut ’58 (from a portrait by Chip Borkenhagen, artist and founding publisher of the Lake Country Journal Magazine.)

Threads of the Past Weave the Present By Joseph Plut ’58

The Lord has been weaving and rearranging the threads of my life in an ever-changing and ever-astonishing pattern. And as I become more reflective as I age, I discern how God has used Saint John’s to help mold and shape my life, spiritually and professionally. My most vivid memories of my Johnnie years (19541958) stem from the liturgies. A close friend and I would attend two Masses every Sunday—first the students’ Mass and then the monks’ high Mass with Gregorian chant. Not many students attended the second one, but the liturgies, especially the monastic community’s, fed and inspired us. In fact, some of our close friends “diagnosed” us as having contracted “monastery fever.” My friend did enter a Benedictine monastery a few weeks after graduation. He journeyed west to Blue Cloud Abbey, Marvin, South Dakota—I went east to New York City for six years. A Sunday Mass in Venice, my favorite city, in 2004, flooded my mind with memories of these liturgies as the church of San Giorgio Maggiore (Benedictines occupied the original monastery) filled with the solemn rhythms of Gregorian chant. It affected everyone in my tour group, both Catholics and Protestants. Their reaction reminded me how fortunate I had been to experience such a Mass at Saint John’s almost every week for four years. I also remember with admiration and gratitude Fr. Clarus Graves, my first-year French instructor. When I began teaching English at the then Brainerd Community College—with no teaching credits or experience, although I did have a master’s in English and comparative literature—I developed a teaching style, inspired by Fr. Clarus. His teaching and his “antics” gave me permission to be spontaneous and energetic in the classroom and still teach the subject matter. Fr. Clarus would say, “Je danse,” and he would dance with his scapular swinging. On one cold, wintry day, he ran to the window, shouting “Ouvrez

la fenêtre,” pushing the window up so that snowflakes drifted in. Then, with the same burst of energy, “Fermez la fenêtre,” and down the window would slam. One never knew what to expect. I’ll never forget him. And Saint John’s helped cultivate my lasting friendship with author Jon Hassler ’55. We met in 1968 at Brainerd Community College when Jon began teaching English there. One fall Jon invited me to visit his off-campus art appreciation class in Wadena since I had spent some weeks in Europe that summer. On the way to and from Wadena, we discovered how much we had in common—Saint John’s (our years there overlapped by one), a deep admiration for the writer Flannery O’Connor, and much more. (I thank Saint John’s and Sister Mariella Gable for introducing me to O’Connor’s writing.) We talked as if we would never quit. That time together began and anchored our friendship until Jon’s death in 2008. For the first issue of central Minnesota’s Lake Country Journal Magazine, in 1997, I interviewed Jon for the cover feature. To tie all of these threads together, our interview took place at Sexton Commons, named in honor of Bill Sexton, a 1955 classmate of Jon’s. Now Saint John’s enters a new era, as we welcome our first lay president. Yet, as I’ve learned, the threads of the past are inextricably woven into the future—inspiring and coloring the new pattern. Like the Masses that inspired and fed me long ago, the best of our past will endure, shaping Saint John’s future in its own ever-changing and everastonishing pattern. Joseph Plut ’58 earned his master’s in English at Columbia University and taught English and humanities for 36 years at Central Lakes College in Brainerd, Minn. He was a longtime friend and colleague of writer Jon Hassler ’55 and is the author of Conversations with Jon Hassler (Nodin Press, 2010).

“Inspiring Lives” is devoted to reflective pieces with a Saint John’s or Benedictine theme written by Saint John’s alumni. Please feel free to submit essays, poetry or other reflections for consideration to the editor: jscoon@csbsju.edu.