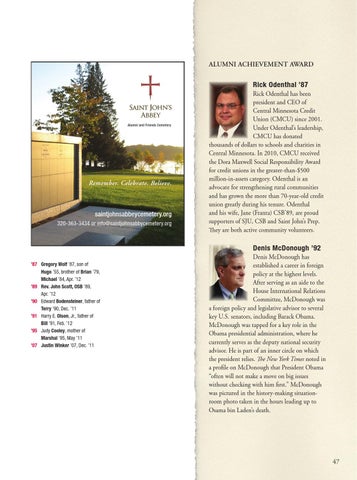 Rick Odenthal has been president and CEO of Central Minnesota Credit Union (CMCU) since 2001. Under Odenthal’s leadership, CMCU has donated thousands of dollars to schools and charities in Central Minnesota. In 2010, CMCU received the Dora Maxwell Social Responsibility Award for credit unions in the greater-than-$500 million-in-assets category. Odenthal is an advocate for strengthening rural communities and has grown the more than 70-year-old credit union greatly during his tenure. Odenthal and his wife, Jane (Franta) CSB’89, are proud supporters of SJU, CSB and Saint John’s Prep. They are both active community volunteers.

Denis McDonough has established a career in foreign policy at the highest levels. After serving as an aide to the House International Relations Committee, McDonough was a foreign policy and legislative advisor to several key U.S. senators, including Barack Obama. McDonough was tapped for a key role in the Obama presidential administration, where he currently serves as the deputy national security advisor. He is part of an inner circle on which the president relies. The New York Times noted in a profile on McDonough that President Obama “often will not make a move on big issues without checking with him first.” McDonough was pictured in the history-making situationroom photo taken in the hours leading up to Osama bin Laden’s death.